It’s going to be the big net buzzword of 2008, I predict. Lifestream. Ooooooo. Say it again. “Lifestream.” Sends chills down your mouse, doesn’t it? 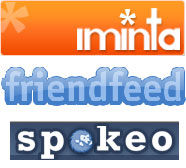 Let me describe this for you if the concept isn’t familiar to you. In today’s net-world, many folks have all kinds of services that they use to post pictures, update their status, check their news, etc. Each time you update your status over at Facebook, Twitter, Jaiku, etc., you’re leaving a footprint. Some would argue whether all of it is a waste of time. However, it’s becoming a significant way that people can keep up with their friends and family without having to call and say, “Hey… what are you doing?” 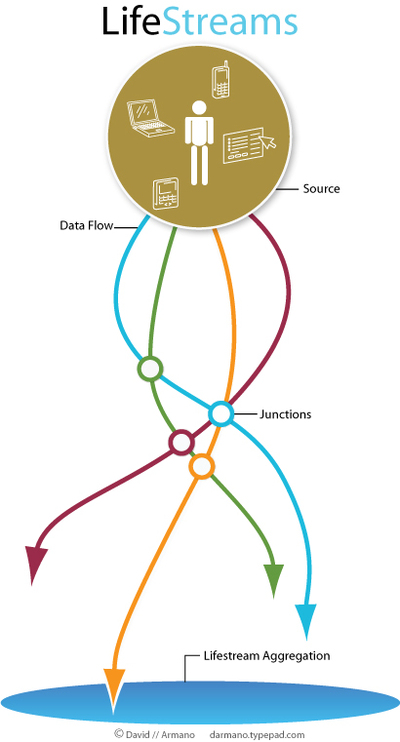 Privacy issues aside, the concept of Lifestreaming comes into play when you attempt to collect all these multiple footprints and internet tracks into one location. Imagine being able to go to your friend’s blog or Lifestream page and in one place get an idea of recent news, happenings, status updates, pictures, videos, etc. Rather than spending ridiculous time coasting between Flickr, Youtube, Twitter, Facebook and the like, you are able to see it all at one time. Attractive?

Well, there are several lifestream services that have now sprung up, and I’m in process of testing out a few. So far, they include Friendfeed, Iminta, and Spokeo. Of course, I’ve been using Tumblr for quite a while now, and I still think it has the friendliest interface and most easy to use and attractive way to display all your feeds in a blog style. (You can see my Tumblr here.)

Also, you can stop by the excellent Lifestream Blog to get an idea of what is possible with this concept. In addition, here are a few bloggers who have already begun to implement lifestreaming into their personal blogs:

In addition, ReadWriteWeb has composed a monster list of 35 Lifestreaming tools.

Hopefully my next step: install a WordPress plugin into my blog that will create a lifestream in a sidebar or separate page for the insanely curious.

What makes Lifestreaming so significant is best summed up in a paragraph over at Logic+Emotion:

But here’s what I find really interesting about Lifestreams. What the visual here shows is that our streams do have a source. Us. Network aside—it’s the individual that produces a stream of data whether it be media, text or other. And what’s becoming increasingly important is the array of multiple digital platforms that we use to create the streams. Most of the aforementioned platforms have some type of mobile support. Add advances in technology like the iPhone and the increasing pervasiveness of wireless digital networks and you’ve got the perfect storm. Soon, most participants will be looking for ways to make sense out of there multiple streams—not just the early adopters like Rubel.

I truly like the idea of being to keep up with some of my friends and colleagues in this way. It’s kind of a relational Ciffnotes. One glance at a person’s lifestream can say a lot and provoke a well-timed phone call or encouraging email. It also has a lot of potential from the other side too – imagine being able to simply post in one place, and a website take care of updating your status in all the sites that you use… (Can you say hello.txt?)

Stay tuned as I continue on the search for lifesteaming and streamlining our internet experience. Less is more, while more is… well, more.