The expansion of local news 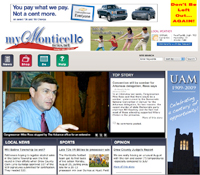 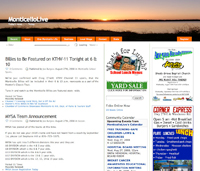 Our community has enjoyed a local news website since the fall of 2006 – MonticelloLive.com. Several months after its birth, the local weekly started a site called MyMonticelloNews.net in an attempt to compete. In spite of having a large staff and advertising budget, the local paper, still a part of the MSM (main stream media) struggled to keep up.

In the past six months, however, the late-comer has had a total redesign and overhaul of their site. It transitioned from simply regurgitating the news that was in the Thursday edition of the pater to trying to keep up-to-date news on the website (what a novelty!). MyMonticelloNews.net may still have less traffic than MonticelloLive.com, which remains a one-man show. However, there are several national sites which are trying to move into the local news site business.

Topix.net has grown to become the 3rd largest news website, according to Market Watch. With Topix.net, you can plug in your zip code and view the latest in local news.

What Topix can’t do at present is what our two local news sites are doing. That’s provide up-to-the-minute updates and news. MonticelloLive remains the best at this.

However, I predict that one day these national news sites will make great strides in smaller, local markets. They will do so by employing local writers, photographers and stay-at-home moms to help them create a relevant local news presence.

The future of the MSM is in a great state of transition right now. In the past 10 years, content no longer has to be filtered through an agenda-promoting liberal-leaning media elite. With the advent of blogging, information becomes fair game, and what was formerly hidden (because it may have conflicted with the MSM’s point of view) is now able to make it to the light.

In 1644 Milton wrote in Areopagitica, “Let [Truth] and Falsehood grapple; who ever knew Truth put to the worse, in a free and open encounter.”

One can see the struggle involved as local news expands and meets this marketplace of the mind. I know that both local news sites have in the past edited contributors’ comments (or refused to publish them altogether). Many times this is not done because they are libelous or slanderous. Rather, content is screened so as not to offend either a) advertisers or b) influencers. This approach reveals the tension involved in releasing control of the flow of information.

One has to decide what’s more important – the information itself and truth – or your media. This censoriousness is fine, since both media are privately owned. However, a person should be aware that as much as a site might try to promote objectivity, if screening such as this is done (and it is), you may not be receiving all the information.

In a 1919 dissenting opinion Justice Holmes said, “…the ultimate good desired is better reached by free trade in ideas – that the best test of truth is the power of the thought to get itself accepted in the competition of the market.” (Abrams v. United States)

I know firsthand the difficulty of maintaining fairness and balance in a free-wheeling, feedback-oriented news site since I started MonticelloLive. I know that harsh comments are disturbing, but when you allow dissent and disagreement, it usually allows the truth to rise to the top. Fools are made quickly with the push of a return key. The wise are revealed by their patient and careful response. (And many times, the wise are those who don’t respond to a fool.)

MSM’s paid subscription numbers are falling across the world as more and more people turn to the net for their primary news. With the advent of streaming media, online viewership of TV shows, movies and podcasts will continue to increase.