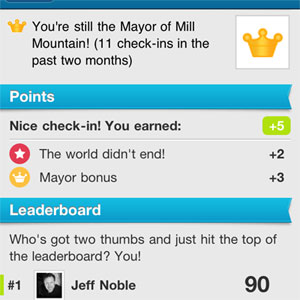 I laughed at my Foursquare screen on Sunday morning. (see pic at right) With Harold Camping being shown to be a false prophet again, you’d think folks would learn that the Bible is completely reliable. There’s that pesky little verse in Matthew 24.36 where Jesus says, “But concerning that day and hour no one knows, not even the angels of heaven, nor the Son, but the Father only.”

Harold keeps trying to get around that, and after a few days in self-imposed exile last Sunday-Monday, he emerged saying he was off, but only by a few months. The earth will be obliterated on October 21 now. Don’t hold your breath.

There are some good things that Camping’s craziness provoked, however. One is that it allowed Christians to discuss matters of eternity, heaven and hell in mainstream conversations. It also showed us again the trustworthiness of scripture (and again, it challenges us to call a false prophet a false prophet). Let’s not be mealy-mouthed about that.

But the prophet who presumes to speak a word in my name that I have not commanded him to speak, or who speaks in the name of other gods, that same prophet shall die.’ And if you say in your heart, ‘How may we know the word that the LORD has not spoken?’—when a prophet speaks in the name of the LORD, if the word does not come to pass or come true, that is a word that the LORD has not spoken; the prophet has spoken it presumptuously. You need not be afraid of him. (Deuteronomy 18:20-22 ESV)

Two articles I saw this past week were especially insightful:

Personally, I knew Jesus wasn’t coming back on Camping’s timetable. However, He is coming back. We see the birth pangs all around us. Let’s not disdain The Return, only false predictions of it. And let’s pray that false predictions don’t inoculate an unbelieving world to the reality of Judgement Day.

When a super, megachurch is where you want to be…

This week, Darrell Cook and I launched a website that we’ve been laughing about for a long time. It’s called churchplanting123.com. You can follow it on Twitter at churchplant123. Essentially, it’s a sarcastic, tongue-in-cheek look at the world of church planting. We plan on making it a video blog with regular updates.

Go here to view the first installment called “The Name.”

I’ve been doing a ton of research and reading on evolution … (again). This is probably the fourth or fifth time that I’ve devoted time to review latest writings and claims from multiple perspectives. Stay tuned here for reflections and thoughts. Go here for the last entry on the topic – Tackling Runaway Evolution. When I post my next entry, you’ll be able to determine if my views have evolved…

It’s a newish app that allows you to post pictures instead of a status. It also includes numerous photo filters for enhancing your shots. It allows you follow folks and to like or comment on their pictures. Very nice, streamlined app. There are also a number of web apps for those of you who don’t have a phone that supports Instragram so that you can at least get your photo fix from your favorite snapper. (Gramfeed, Webstagram) My personal feed at Webstragram is here.

From this past week: