Mo’ love through a moped 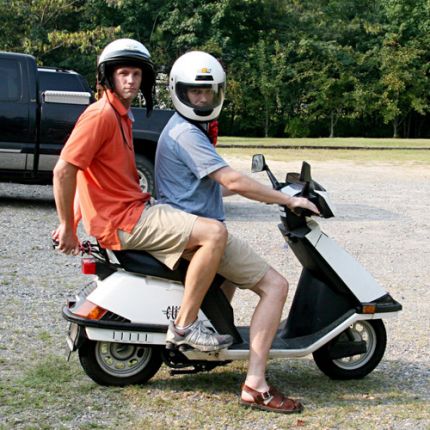 Today, I picked up the newest transportation addition to the Noble household, a 1998 Honda Elite. An incredible friend simply gave it to me since he’s moved to a larger town and doesn’t have the same use for it. Many thanks, Kevin! I was reminded of another recent gift in my iPhone (have I told you that I have an iPhone?) from my dad. Then I remembered receiving this unexpectedly this year.

Ryan Morgan was the first recipient of a ride on my new-to-me scooter. I think I’m gonna name it Ghost. Either that or Steve Martin. The latter would be because everywhere the moped and I show up, people seem to laugh. I haven’t figured that out yet. 😉 Shelley managed to catch a few shots of us on Ghost’s maiden voyage.

The surreal thing about receiving a gift that is unexpected and obviously costly is the rapidity in which it produces humility. Whether a book, an iPhone, or a moped… I’m undeserving. And because I seek to be a Christ-follower, the idea of unmerited favor resonates deeply. 1 John 3.1 says, “How great is the love that the Father has lavished on us, that we should be called children of God.” (NIV) Indeed!

I’d like to encourage you to try giving an unexpected gift this week. You may be surprised at the response such an action receives. If you get any “why’s?” you can simply respond, “I’m trying to model the favor that God has given me.”