My Daughter the Extortionist 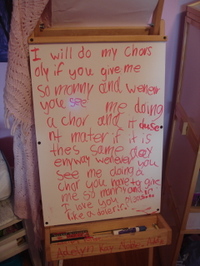 Caro walked into Adelyn’s room the other day to discover this message she had left for us on her easel. I have no idea what prompted this. All I know is that she says she’s saving her money for Disneyworld. Extorting it out of mom and dad for doing chores is not our idea of how she should do this. For some reason, it reminds me of my sister…

My sis always seems to have some kind of money scheme up her sleeve. It’s been that way all our lives. Growing up, I had a paper route for the Arkansas Democrat (which won the Great Arkansas Paper War vs. the Arkansas Gazette… why in the world they would want to pay homage to the Gazette by including it in their name is beyond me. They won. Fair and square. It’s kind of like being up by 3 points with 2 seconds left in the basketball game and then not guarding the opponent’s best 3-point shooter and allowing a tie at the end. But I digress.). I was the one with the job, but Amy was always the one with the money. I was 16; she was 12. I’d have $12 in my wallet; she would have $184 stashed away in her sock drawer. It was so frustrating.

Adelyn’s message just takes me back. I’m sure she got that from her mother…

By the way, don’t forget the tip trough over to the left…

Update… a day after I posted this, Amy called. She says, “Hey. I need to talk to Caro. I have a money-making idea…”