My day as a Watch DOG 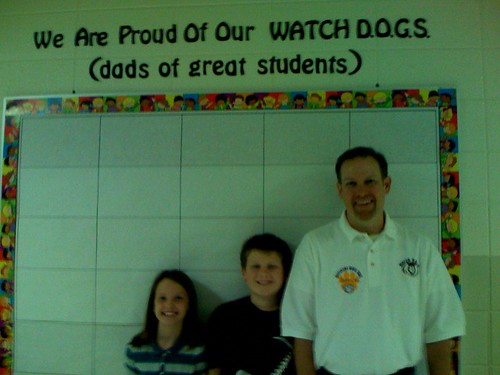 I was Monticello Intermediate School’s first Watch DOG today. I hope you can paws long enough from your blog hopping to bark up this tree for a moment. I had a great experience; let me tell you why…

First of all, Watch DOGS is a national program, and you can read about its inception at MIS here. It’s a first class effort to involve dads and father figures in their children’s lives while at the same time assisting our schools with encouragement, protection and a level of added security.

I arrived at MIS this morning with my Watch DOGS shirt on, and every child that was dropped off happily greeted me. Some even stared in awe. It was a surreal reception. If only I could get my wife to treat me that way…. 😉

I was given a schedule for my day, which included observation/assistance in 5 different classes for only 45 minutes each. In between classroom time, I patrolled the hallways. I was able to eat lunch with my kids and even had a blast at recess with the third graders and then the fourth graders. 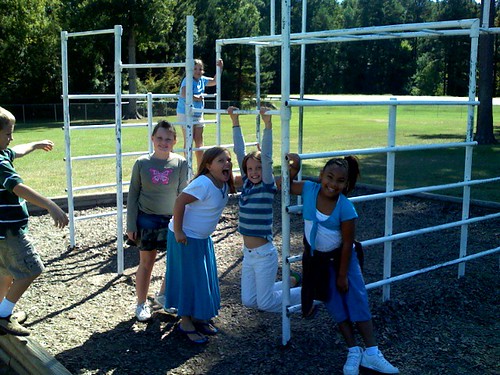 At recess, I initiated a small game of Chinese Freeze Tag with Adelyn and a few of her friends which blew up into this chaotic event involving 50+ screaming third graders. That was cut short quickly when one of the third graders slipped from the monkey bars and fell on his arm. I walked him to the office, comforting him and then returned. I broke up one girl fight and helped another student who had tripped and fallen, scraping her hands.

As the third graders left and the fourth graders arrived on the playground, I wondered if this injury rate was normal for the school… At that rate (I was doing mental calculations), every child should have equal opportunity for injury at some point during the school year… 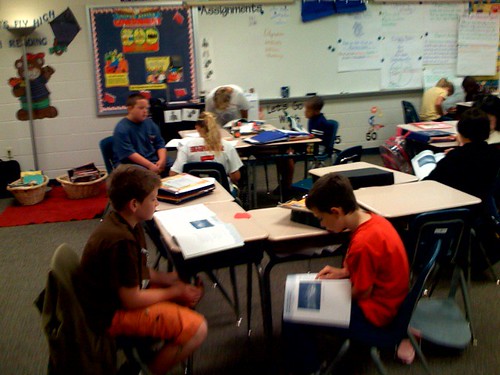 I was extremely impressed with the teachers and classrooms I observed in. I am deeply grateful for kind instructors who demonstrated remarkable creativity, patience, and dedication to our students. I was reminded all over again why I am such a vocal supporter of public education. Our public school systems in Monticello are an excellent example of what happens when sharp, talented educators and administrators are involved and parents commit themselves to holistic education.

The education process does not begin or end in the school. The foundation for education must be in the home. When parents reinforce, support and assist their students and schools, the result is a dynamic, holistic educational process. I was deeply proud of my children’s school and its leaders and staff today. I know that the process is not perfect, but a perfect one doesn’t exist. However, I continued to be thankful for the blessing of our local schools throughout the day.

I didn’t hear the intercom announcing that the school’s “first Watch DOG” would be on campus, but apparently the students were encouraged to “high five” the dad on duty. I felt like a hero all day. Every child that saw me in the halls wanted to high five me. When I passed a line of kids in the halls for bathroom break, I felt like an NFL athlete coming out of the tunnel on game day. It was just a long line of high fives.

Although I had seen the promotional video for Watch DOGS, I don’t think I was quite prepared for how the kids would receive me. Is it so unusual to see a dad involved at school? I guess so. Even the teachers and staff treated me like I was special today. Perhaps that says something to our dads in our culture… If we will connect better with our kids and be intentionally involved in their lives, huge things can happen.

I will be talking to the guys at our church who are graduates of our Raising a Modern Day Knight study and scheduling a time to offer it to men in our community. In addition, next January, we will be partnering with a few other churches to offer Men’s Fraternity in our community. Both experiences encourage men to be the men God created us to be.

Oh, by the way, I was on my last hallway patrol of the day when I heard over the intercom… “Will Jeff Noble please report to the office?”

A cold chill went down my spine. Even though I knew what it was about, it was still unnerving and brought back nightmarish flashbacks to grade school days. I think it’s the fear of every kids to be called to the office. Mine was even more heightened since my mom worked at my school. If I was ever in real trouble, the office was only the first stop; my mom’s room was the last.

Upon arriving in the office, I had to fill out an injury report on the third grader who had fallen from the monkeybars at recess. A trip to the doctor had revealed a broken arm.

As the kids loaded up into their cars and buses to end the day, I got more high fives and smiles. If you’re a mom or dad reading this, I highly encourage you to check out the program and get involved or begin one in your school system.

Whew. Now it’s time to go gnaw on a bone or something…