Many of you have followed my Moped Saga. It began last year with the attempt by my family to be a one-car family due to finances (can we say gas prices?). After successfully parking my Nissan for a month without any use, we sold it to some friends. We were given a 1988 Honda Elite 80 scooter, and it became my primary mode of transportation, as well as an endless source of ridicule from folks in the community. That is, until gas went over $3.50/gallon. Then we started seeing other mopeds in town, and folks began to stop and ask me how much gas mileage mine got. 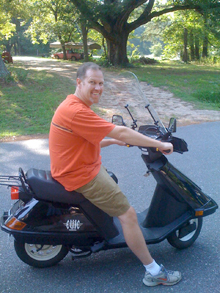 We christened the scooter as “Ghost” and all was well in the world. Well, until a picture of Ryan and I on Ghost showed up on a homosexual website. That pretty much stunk. Ryan is still a little gun shy about mopeds now. He breaks out in a cold sweat every time someone says “scooter.”

Ghost became a welcome addition to the family, and we all enjoyed it. A scooter in a town of our size (about 9000) is a fantastic money saver and a source of endless fun and enjoyment. In spring, it’s truly amazing to drive down city streets and drink in the smell of budding flowers and freshly mown grass. Roadkill aroma is another story.

Then came the unthinkable – Ghost was ripped from our lives one evening as crass crooks thought they needed it more than we did. It was stolen from our carport (and there are three motion-sensor lights back there!). The police came and filed a report, but that was the last anyone around here saw of Ghost.

We tried – hard – to make one-car, eight-legs work around here but just couldn’t do it. I have been researching and looking for a replacement for a while now. I established the Pastor’s Scooter Fund and raised $140 – enough for a wheel. So a bargain was what I was hunting for.

Lo and behold, I found a 2004 Honda Elite 80 in Little Rock at the Kawasaki dealership. It had been traded in on a motorcycle. After some quick questions, I bought the replacement moped sight unseen over the phone. They delivered it Saturday! And it has a windshield! You know how you can tell a happy moped owner? Bugs in his teeth. This will be a welcome addition.

There have been some tune-up issues related to it so far, but we are thrilled and grateful. Hopefully, we can pay it off in the next six months, but we are now much more mobile than we’ve been. I’m so grateful for all the friends who have transported me around town when I’ve been without the vehicle. Tracy, Jeremy and Trey come to mind. TJ has let me borrow his truck several times. And thanks to all the Ghost Hunters… Michael being the new President of Ghost Hunters Anonymous. Thanks, everyone!

Now for the big announcement… the shiny black Honda’s name is…. drumroll please… the Batmoped! We wrestled with “Shadow” as an option, and that may become a nickname, but for now, watch out! The Dark Knight/pastor/graphic designer/Mac Daddy is back on wheels!