I am saying no to Obama on Tuesday

I think Shane Vanderhart has an excellent post describing his reasons for voting for McCain. I encourage you to read it. Most of his reasons mirror my own.

You can also review my Tumblog for some recent links and items of interest.

I don’t see this as just another election. While I initially supported George W. Bush vehemently in the previous two elections, these past two years have seemed to indicate a wandering administration. I’ve been particularly frustrated with the confusion and insanity of the No Child Left Behind Act. While it initially was a positive effort, it seems like it has left many schools, states, and districts in a state of fear of reprisal rather than instilling a positive momentum for educational reform. Struggling kids are still left behind, but now smart kids are being overlooked in an effort to pull along the struggling ones. We’ve effectively dumbed-down our educational system.

I’m not thrilled about fighting in Iraq either. However, I’d rather be fighting there than here. Make no mistake. Radical Muslims HATE America. They will not lay down their arms against us. Bush was right to take the fight to their region. Yet, I remain ambivalent over the Iraq issue. I don’t blame him for it. I don’t think it should be a political football.

The economy… well, yes it stinks. But I hardly feel like that’s Bush’s fault either. The best minds on both sides of each political spectrum have punted on true fiscal accountability for so long that neither wants to claim responsibility. The burden has been passed off on the tax payer through a bailout that still no one can tell you whether it has worked or not. Both McCain and Obama have proposed budgets that will increase our national deficit. Neither wants to face the hard, cold facts that the next administration must necessarily tighten the government’s belt and work to reduce spending, cut programs, and bring our nation to a fiscal viability.

It crystalizes for me in the morality and faith commitment of each candidate. Obama is unashamedly one of the most liberal interpreters of when life begins. He’s downright frightening in this regard. If you have children or love them, it should concern you that this candidate has a complete disregard for the life of a baby and has refused to consider the implications of his stand.

While I could run down a list of more reasons, the most disconcerting reasons to NOT vote for Obama involve the ambiguity on exactly who the man is. He is one of the most vague, slippery un-characters that I’ve seen in many years. Who is he really? For all the media attention and hype, we have yet to really understand what he stands for and what he really thinks apart from the liberal machinery of the Democratic Party.

This one candidate has outspent every other single candidate in history. McCain has kept his promise to not raise more than what was allowed, but Obama bypassed his early commitment to campaign finance reform.

Obama, the first major candidate since 1972 to use only private money in the general election, termed his decision “difficult” and blamed it on a public financing system that he says is “broken.”

Critics say his record $639 million fundraising total so far — compared with McCain’s $360 million — could very well be the end of a public financing system that has prevailed for the past 34 years.

“It’s a mess,” said John Samples, a campaign finance scholar for the Cato Institute, a libertarian think tank in Washington, D.C, speaking of the public financing system. “It’s certainly not serving any of the purposes it was supposedly set up to do.” [Source.]

$639 million. Of course, I’m not thrilled about $360 million either. Does Obama honestly think he represents the little people of America? If he has spent so freely with other people’s money to get elected, what makes us think he will curb that when he is elected?

In addition, I am ardently opposed to the massive government growth – in welfare, insurance and other intrusive programs  – that the Democratic Party has demonstrated. I am not in favor of government being my Savior. It seems that a bigger centralized government is the only strategy the left wing of that Party (who is now entrenched in leadership) know. Hello socialism.

I’ve already heard a few stories of ardent Democrats across the nation who have vocally supported him for fear of retaliation – either political or social – who simply have not been able to actually vote for him.

No one sees who you vote for in the booth. I would urge all voters who have sincere doubts not to take a gamble on this election of great significance. Let’s not roll the dice on issues like partial-birth abortion, redistributive wealth, shady alliances and friendships with America-haters, and vague personal histories.

In addition, though he claims to be a Christian, there are literally dozens of YouTube videos of Islamic leaders voicing their support for Obama and claiming that he is Muslim – either faithful or an apostate. His redistributive philosophies are certainly socialistic. (Yet we already become socialistic in many of our government handout programs).

As far as Obama’s primary competition – John McCain, I really haven’t been inspired by him. However, at least I know what I’m getting from him. I know he loves America and its people. I know that he has served us faithfully for many, many years. I know that he has suffered for freedom. I know that he has put his administration in touch with average Americans by selecting Sarah Palin as his VP candidate. I like his stand on the issues.

I also like what Governor Arnold Schwarzenegger said recently as he introduced John McCain in Ohio:

John McCain served longer in a POW camp than his opponent has in the United States Senate. Ladies and gentlemen, I only play an action hero in my movies, but John McCain is a real action hero. 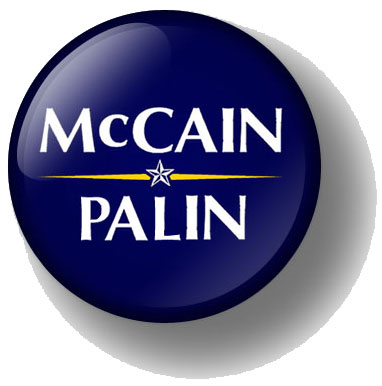 Some other rambling thoughts: I really resent Obamaniacs insinuating that the reason “red states” are red is because of racism. If you have done any reading whatsoever of conservative and liberal blogs and sites, you’ll notice a definite tone difference. Obama supporters often are quite vicious to anyone who does not support him. I will concede that there are idiots out there that support McCain. However, on the average, red states are being painted “white” with remarks like “looks like it’s the Civil War that is determining this election more than anything else.”

I appreciated this well-written conclusion to a recent article:

Barack Obama’s mixed race background may be the only [italics mine] thing he ever had in his favor. Americans want nothing more than to see minorities succeed, but such a desire can never outweigh their need to elect a responsible commander-in-chief — a leader sympathetic to our cause who will defend our country from its enemies without qualm or apology. Such a man is not Barack Obama and no amount of media distortion can ever change this fact.

As you prepare to vote Tuesday, I urge you… if you’re undecided or in doubt… vote for John McCain. Vote for certainty, experience, character, and life. Barack Obama, if he is the real deal, will not go away. And maybe after a few more years of public service and promise fulfillment, he will be more prepared to lead – maybe. He has a lot he needs to clear up.