Review: Not Even a Hint 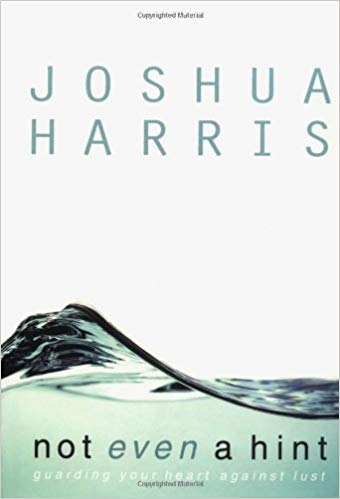 My buddy and fellow Journeyman, Taylor James, loaned me a book recently. It’s Josh Harris’ latest installment, Not Even a Hint. You remember Josh – he was the guy that kissed dating goodbye and then got married. My wife has also encouraged me to kiss dating goodbye. That was one principle that was pretty easy for me to practice after marriage.

I say all that tongue in cheek, because Hint is really a good book. If you’ve read similar books before, you’ll find that much is a repeat of some time-honored principles for combating lust in your life. The refreshing thing about Hint is that it doesn’t create lust by describing in lurid detail instances where the author has erred before. (I found this to be the case of Every Young Man’s Battle, and eventually put it down in disgust. You can see my review there on amazon.com.) Don’t put the book down until you get to the best chapters of the book, beginning with “Half a Poison Pill Won’t Kill You.”

Harris urges the reader to quit trying to fight lust with the “diet approach.” You simply can’t fight lust with prohibitions alone. He says one of the keys to defeating lust is first of all to realize that it is a perversion of a legitimate drive in your nature. God created pleasure for us to enjoy, but lust seeks to use that pleasure for one’s own self benefit and glory. In lust, we seek to have what is not given to us, when we want it, on our own terms.

We must fight it {lust} with the massive promise of superior happiness. We must swallow up the little flicker of lust’s pleasure in the conflagration of holy satisfaction.”

Ultimately, this means that we will enjoy sexual pleasure all the more when our primary pleasure is rooted and found in the God who gave it to us…

In the Poison Pill chapter, Harris helps cut to the chase of many a man’s moral compromising. He points out that many of our decisions undermine our efforts to avoid lust by actually introducing it in small portions. The movies we watch, music we listen to, and unchecked eyes all pour into a finite container. When that is full, watch out. Things that we ingest don’t evaporate. They stay in our minds, and unless replaced or renewed, our minds will recall them at moments when our defenses are weak.

He encourages us to ask ourselves, “Can you thank God for it?” when viewing a questionable scene, image, or when reading or listening to such material. Many times, we’ll leave saying, “That was a great movie!” and unconsciously filter out the objectionable material in it. Yet, Joel Belz says,

“Today many images of sin that should produce repulsion instead produce attraction. You should be able to honestly give thanks to God for the portrayal (in media) in its totality.”

That’s a high standard, but one that which prevents us from justifying the exposure of our minds to things that will derail us later.

He also urges us to grow in discernment. He uses the analogy of food and weight gain here. “If you don’t enjoy a calorie, it won’t make you fat” – seems to be the excuse of many men who unquestionably diet on compromising material. We seem to think we will be unaffected by what we watch, listen to, or read, if we “disapprove” of the right stuff in it.

For a prolific movie renter like myself, he readily identifies. He encourages those of us who rent movies a lot to be sensitive to the possibility of bending your standards because you “need” something to watch. Undiscerning minds will have a deadening effect on your soul.

I thought his chapter called Lone Ranger was good, but was limited by a poor view and theology of the church. I’m not against his suggestion for someone to get involved in a local church, obviously, but he took a couple of needless potshots at para-church ministries. Basically, he’s encouraging Christian community and the need for loving support and accountability. However, he talks here about “church” as an institution in some ways. I just thought it could have been a lot stronger to focus on the health and miracle of biblical community rather than encouraging involvement in church activity.

His Sword of the Spirit chapter was good, but its strength lay in the wonderful, practical examples of the specific scriptures he recommends for memorization to specific issues and excuses that we sometimes offer. For example:

In Holiness Is a Harvest, Harris concludes the book with the analogy of sowing and gardening. What seed you put in the ground will eventually come up. However, you must tend the soil, water it, and weed it. In the same way, he says that what we put into our minds will eventually grow, especially if we’re tending it or feeding it. Scripture echoes this principles (or originated it):

On the whole, I’d heartily recommend the book. Again, as I said before, you may find much to be repetitive, but get to the Poison Pill chapter, and you’ll reap the benefits.