This post is repost from the entry I wrote for Aaron Peck’s blog over at carpdime.com. The assignment was to write about “one experience you’ve had that helped shape the person you are today.”

There are so many angles I could go on this, but I think I’ll choose the most profound, fulfilling and friendship-begetting activity known to man: fantasy football.

Aaron probably had no idea who he was asking to write on his blog, but in the fantasy football world, I’m kinda a big deal. You see, I’ve been playing fantasy football since 1992. That’s right, you whipper snappers! That’s 22 years of experience. Those of you who think you’re a baller just because you drafted Robert Griffin III? Consider this. I drafted Bret Favre as a rookie in 1993. Boom.

So here’s how I got involved.. I had just gotten married in May 1992 and started as a youth intern at First Baptist Church of Garland, Texas. I had been a seminary student for a year already in a four year program in Fort Worth. The youth minister was a friend and now my boss – Kevin Wieser – and he invited me to fill a vacancy in his league mid-season. So the 1993 season was the first time I participated in a draft.

Here’s my roster, for those of you who are NFL fans:

At any rate, those were the glory days of fantasy football. There weren’t magazines about it, nor were there TV shows. When I told people I played fantasy football, I quickly had to explain that it wasn’t raunchy or porn-related. Apparently the word “fantasy” conjured up all kinds of sordid thoughts among my Baptist friends. 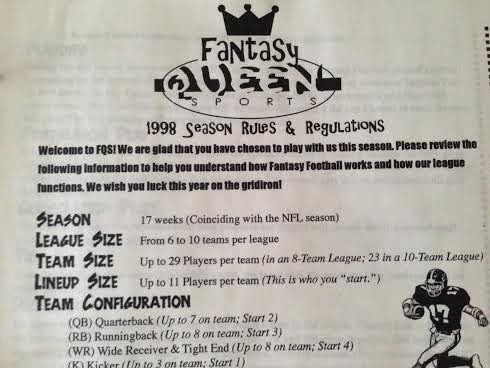 Our “commissioner” was in California. He ran what we figured out was a pretty profitable enterprise. We’d send him $30, and he’d send us – in the mail – our weekly results and reports. We had to drop our starting lineups in the mail on a Tuesday in order for them to arrive in time. As a rookie coach, I remember the snickers on our live draft conference call when I drafted Marvin Jones (the top draft pick that year.. unfortunately, he was a defensive player). The commissioner – probably as a joke – still put him on my roster, and I had to endure snide comments for several drafts after that.

Monday morning almost always found me with a copy of the sports page of the Dallas Morning News, poring over the boxscores, and adding up my team and my opponent’s team scores. I’d repeat the process for a close game on Tuesday morning, to get the Monday Night Football game boxscore. Occasionally, I’d celebrate for a couple of days prematurely, only to find out when the official reports came in that I’d miscalculated and actually lost.

Those were the days before internet, and I remember spending a lot of time during the season, actually on the phone with other owners, trying to manipulate, cajole and coerce them into making trades in a way that would benefit my upstart team.

Kevin and I were pretty competitive. We both kept notebooks of our teams, stats, and research. In a particularly weak moment one hot fall in Dallas, I remember he caught me with my hand in the trunk. I knew he kept his notebook in the trunk of his car, and when he ran in to the church to grab something, I popped the hood, jumped out of the car, and was in process of stealing trade secrets when he reappeared sooner than I accounted for. I fumbled around for an excuse, but no hail mary materialized to save my honor. 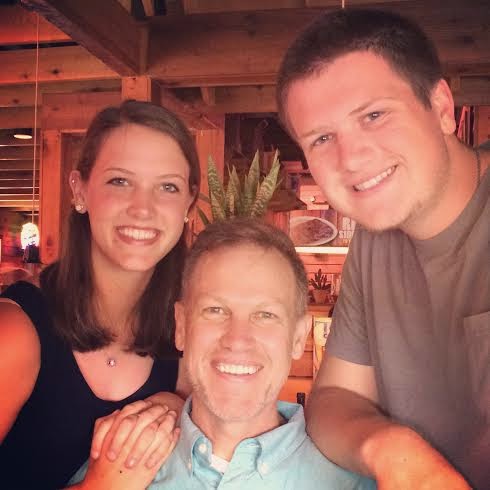 What has fantasy football done for me over the years? It’s kept a group of long-time friends together in leagues who now live across the country. It’s provided hours of enjoyment, taunting, and Sunday afternoon TV intrigue. It’s made me knowledgeable of players across the league. It’s also given me fodder for conversations with an increasing amount of guys over the years that I would have nothing in common with otherwise.

These days, it seems everyone is in a fantasy football league. Even gals have fallen in love with it, although 22 years ago, they were calling us sports nerds. One of the greatest joys has been the last several years when my son got in a league with me and fell in love with it. He actually won our league last year.

I was surprised to discover a hobby that I enjoy so much out of the blue. I’ve won several Super Bowls over the year (three in a row during one remarkable stretch). There have also been some not-so-proud moments.

I’ll confess there have been some lazy mental moments in church on a Sunday where my mind has drifted to wondering whether I should change my lineup (and a few occasions where I actually did via my iPhone). To a group of college guys, I’ve even shamelessly compared my careful study of players in preparation for a fantasy draft to the preparation of Jesus in selecting His disciples, in a weak attempt to be relevant. Then there was the time Kevin figured out my login password (after we went high tech) and changed the score of my Super Bowl game, giving me a loss. I was devastated and moped around the house for 30 minutes until I realized that the scores had been tampered with.

This probably wasn’t the post most would expect. I’d be happy to give it another shot, and I have blogged about my story here. However, fantasy football has been a part of my life for a long time, and it’s definitely helped shape who I am today. By the way, it’s about that time for fall prep!