This particular post has been percolating in my head for a long time. I kept waiting for inspirations of majestic verbiage in order to craft an appropriate entry. I wanted people to read this sublime creation and weep in amazement. Unfortunately, I’ve now decided to simply dash off a few words before a small town in Arkansas feels forgotten and unappreciated.

First.. the before and after pictures: 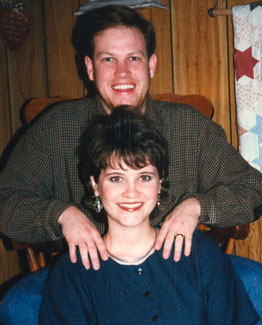 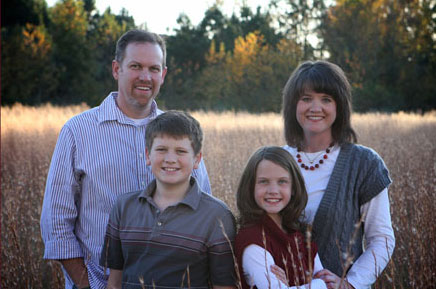 The first picture was taken for our first Christmas photo in Monticello, Arkansas. It was the winter of 1995, and Carolyn and I were thrilled to be making a new town our home. We’d arrived in southeast Arkansas via Dallas, Texas after graduating from seminary. That summer and fall we feel deeply in love with college students as we served and ministered alongside them at the University of Arkansas at Monticello Baptist Collegiate Ministry.

The second picture was taken last December, 2008. You’ll notice the two large appendages on the front of our bodies. We call them our kids – Sam and Adelyn. When we moved from Monticello in July of this year, it marked 14 years since we’d arrived. So much had changed. So much the same.

There were two life segments for us in Monticello. Our first 8 years were invested in extraordinary days of laughter, sorrow and life transformation on the campus. Our second 6 were joyfully hard, celebratory days of faith adventure through Journey Church.

In Dr. Seuss’ classic The Grinch Who Stole Christmas, readers were delightedly engaged with a town called Hooville. He had another book-movie in which an elephant heard a Hoo. In both, it was the small people in the story that made a difference in the life of the central characters. In the same way, Monticello’s people made a lasting and transforming difference in the life of a young couple who became a family in their midst.

There is no way that I could ever begin to name names for the Hoos in Monticello who shaped, contributed, helped, loved, and made our lives full and our hearts grateful over 14 years.

From former students who now have families of their own to students we were just meeting (in Poland of all places) when we left, we have been abundantly graced with the joy of relating and having deep friendship with collegians. They gave to us so much more than we could ever give to them. Here are some things that they gave us: open minds, generous hearts (even when they had empty wallets!), time, babysitting, strong backs for home projects, cars when ours were in the shop (or later when a scooter was impractical because of weather or errands), practical jokes, late nights, video games, Bible studies, memories, friendships, trust, esteem, pictures, and male pattern baldness (at least mine, not Carolyn’s – and yes, I blame it on the students!).

To the students of UAM – past and present – that were/are in our lives – and even some that have passed on, thank you. We are forever changed and grateful because of your partnership in the gospel and in the dailyness of our lives. We’re so humbled by your ministry and friendship that shaped us and loved our children as they grew in your presence.

In 2003, a handful of folks sat around in our living room on Jefferson Street, praying and listening to me share the dream for a new church in Monticello. That small group multiplied many times over, and though Journey was in some ways still small when we left, its people and its influence in the kingdom of God were huge in our lives.

There were those that stepped out of Journey along the way – some moved to other towns; others became disenchanted. With each loss, the Lord led others to step in and continue to help lead the church in its mission to be an authentic, though imperfect, expression of the kingdom of Christ. For those who persisted and trusted and loved and kept the vision, we are so grateful.

To the members of Journey, we love you so dearly. You cried with us. You laughed with us. You allowed us to be your family, even as you became part of ours. We remain astounded by all that the Lord Jesus did in our lives together. We constantly reminded one another that it’s all about Him, and you pursue that truth with tenacity today as you seek the next leader for your vibrant congregation.

To our other heart-friends in Monticello

Besides our family at Journey, the Lord also provided some amazing friends and encouragers in Monticello. Sam and Adelyn grew up with many of your kids. Others stepped into our lives – or were led – by what seemed coincidence. Yet to this day, we are confident it was Providence.

You blessed us so consistently and treated us with such respect. We were constantly encouraged by your smiles, hopes and prayers. With all the ups and downs of church life, health issues, kids, and existence, you were there for us. We tried hard to be there for you as well, but we still wonder if we were truly able to give even half as much as we received.

To the people of Monticello, the ones we shopped with, bumped into occasionally, acquaintances and even strangers…

Your infrequent presence in our life did not endear you any less to us. The atmosphere of Monticello, its people, its personality, its laid-back-ness… we are so appreciative of how the people of Monticello treated us. We loved being able to wave at you as you passed us in cars and have you wave back. We loved that you still prayed at Billies and Pirates games. We loved that Wal-Mart was not a store but a social gathering.

The county fair, Rough and Ready Days, church activities, school events, sports schedules, yard sales, an entire town dressed in camo in the fall, wonderful Christmases, down-home Thanksgivings, hell-hot summers… Through it all, the people of Monticello were there to smile, to help, to share and to impact this Noble couple who in their midst became a Noble family.

Bustles and hustles during hunting time

Didn’t cease though eyes upon a scooter stare

At a small college misnamed U Ain’t Much

Our hearts were lavished by students’ touch

They served and sang, drove and flew

To extend Christ’s gospel to home and pew

Friendships made through thin and thick

Whether birth or death, health or sick,

Gave us joy and helped us stay

Faithful & grateful in the Way.

As fall crowds cheer on reds and blues,

Hunters clean their guns and stir their stews

One family from afar reflects on blessing.

From misty valleys and cool hollow 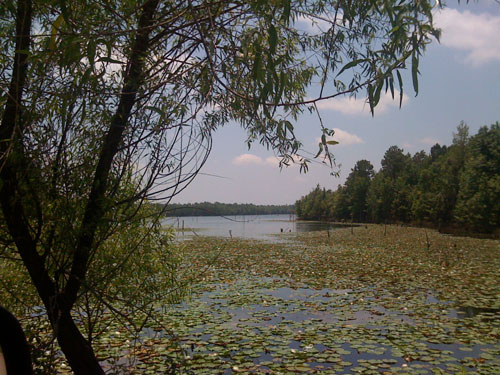