It’s my 20th college reunion this October, and I’m pretty excited about returning to the metropolis of Arkadelphia, Arkansas. My days at Ouachita Baptist University were undoubtedly some of the most formative, fun, and forever-directing of my life.

I learned last week that in honor of OBU Founder’s Day, alumni are being asked to blog memories from college where they will be posted here.

I entered the halls of Daniel South with a hopeful optimism. I went potluck on my roommate, since no one I knew from Little Rock was starting OBU with me that fall in 1986. At my high school graduation, we had weepily sung “Friends Are Friends Forever” by Michael W. Smith. Little did I know that in just a few short months, I would be tight-rolling my jeans and dropping test tubes on the floor in chemistry lab.

It only took a few days to form four-year friendships. Andy Dean and Matt Smith were my suitemates from Germantown, Tennessee. Next door were Mitch Bettis a hometown Arkadelphia hero and Dennis Tucker, football-star-turned-preacher-boy from Fort Smith. Ken Gibson and John Turner lived across the hall and also called Arkadelphia home.

It was a rather inauspicious beginning for me. There was a “Mr. OBU” pageant which was before the days of political correctness. Essentially, the guys dressed up like girls and performed on stage. Memory is fuzzy as to why I found myself in the spotlight in Mitchell with large water balloons strapped around my neck with a shoe string doing aerobics, but thank God I didn’t win. I was first runner up.

Though the cast of characters would change some over the next four years, we stayed close. Mitch, Dennis, Matt and I pledged Kappa Chi that spring, while Andy, Ken and John went to the dark side and pledged Beta Beta Swing.

Silly jokes evolved into elaborate prank wars over the course of four years as we honed our skills on one another and learned hundreds of uses for balloons, survived countless crotch shots and developed healthy paranoia about where we left our car keys.

At some point in those early days hours, we all noticed that OBU had beautiful coeds. As an aside, I taught a Bible study last Monday night to a group of Virginia Tech students on sexuality and relationships. I summarized for them my dating experience in college like this: freshman and junior years were spent in wonderful year-long relationships. I ended one and got dumped in another. I’m still friends with both. However, sophomore and senior years were a whirl of semi-serious short relationships that ended amicably, combined with infamous “Coke dates.” Names will be withheld to protect the innocent. (Exes can sigh in relief and continue reading without trepidation.)

After my freshman year, I changed my major from a pre-med focus to communications and got cussed out for doing so by one of my science professors. I still remember the reception I received from Dr. Downs in the communications department that week. With a twinkle in his eye and what looked like a shrunken head on his desk, he informed me that his department was going to be demand my very best work (typo left in intentionally). He was and remains one of my very favorite professors of all time. If he told me to jump today, I would nod and ask “how high” without hesitation.

It was in the communications department during my sophomore year that Mitch and I developed a deep friendship. Mitch was annointed editor-to-be of the Ouachitonian yearbook, and when the department purchased a bunch of Macintosh computers, we were challenged to produce a “camera-ready” yearbook. As we sat down behind MacPluses with their little monochrome screens, it was the beginning of a lifelong love affair with Apple products.

My junior year was interrupted with heady business plans as Mitch and I created a graphic design agency called AdVantage Advertising. In a few short months, it was consuming our vision, and we moved from dorm rooms to the educational co-op to an empty top floor of an office building downtown. We continued a whirlwind schedule of classes, yearbook production, social activities, dating, church involvement (I was serving at Third Street Baptist at the time) fraternity (we called them social clubs at OBU) and business development. I’m amazed in reflection that I honestly don’t think we ever felt “stressed.” We had taken a huge bite out of life and were enjoying every single moment. Of course, our classmates and girlfriends probably have a different perspective.

It wasn’t until the end of my senior year that I invited a freshman student to help me with the youth group at Third Street. Carolyn Brooks had attracted my attention as a well-grounded, spiritually-vibrant girl who I hoped would teach the girls in the youth on Sunday nights while I taught the guys. She also suspected my motives. I was quickly informed that she would help, but that she was N-O-T interested in dating me.

Our relationship remained friendly throughout that year, but we became steadily closer in heart. Even while she condemned my Coke-date approach to social life, she maintained a joyful perspective on our friendship and continued to offer wisdom and occasional rebuke. It wasn’t until my May 1990 graduation and she returned to Hobbs, New Mexico that we began dating. I stayed in Arkadelphia for another year to work with Mitch before heading to Southwestern Baptist Theological Seminary in the summer of 1991.

Over the course of four years, I distinctly remember looking across the tables of friends at Walt’s and marveling over just how blessed I felt. Ah, Walt’s. It was there that we debated, had late-night pancake breakfasts (where I lip synced Nylons‘ songs with Mitch and Dennis in a choreographed group called The Goobers), tossed jello squares, and planned our futures.

There were professors that inspired and professors that perspired. We were family at OBU. The small post office in the bottom of the  student center wasn’t just a mundane stop. These were pre-email days, and those metal boxes were approached with hope and expectancy. The short dejection of an empty box was quickly replaced by the crowd of friends around you.

Those happy days contained our own versions of Fonzies, Ralph Malphs, Richies and Potsies. We dug deep into relationship and discovered community. We knew the value of looking at another’s face and reading books before Facebook seemed to cheapen both.

Thank you, Arkansas Baptists, for providing for these generations a small college by the Ouachita River. It’s meant the world to us all.

[Read Carolyn’s reflections here. For more memories of OBU and a deeper look at the Noble’s life since then, you can check out my series I wrote simply called Our Story.] 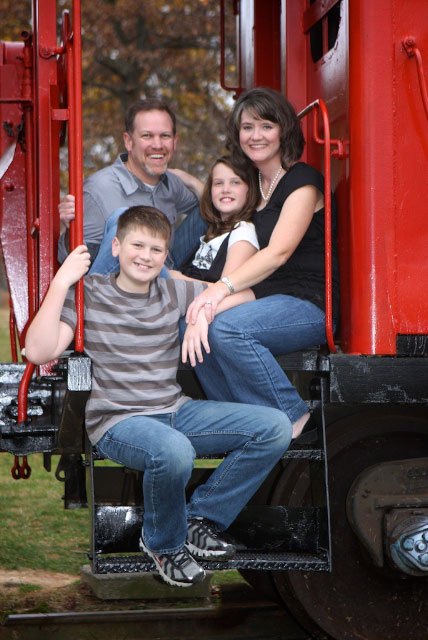