Our Story, 1991 a year of change and transition

If you’re still reading this burdgeoning epic, it must mean you’re wasting time. 😉

Our Christmas in 1990 was going to be spent apart. Caro went home to Hobbs, while Mitch and I worked all month. In Caro’s massive college scrapbook, I found several letters that she’d saved from me during that December. They reveal what I hinted at in the last entry… a deep internal struggle. However, it wasn’t with our relationship; rather, it was with God.

I had assumed back in my junior year that the business Mitch and I had started would be a long-term career for us. We simply had a blast together as business partners and friends. A day in our office in the Enterprise Center, downtown Arkadelphia (our second location, actually) was full of pranks, laughter, design, and Mac-loving ingenuity. A local bank liked our business plan (of course, it helped that Mitch’s aunt was one of the VPs) and fronted us a small business loan in 1988. With that, we had purchased some MacPluses and Mac Plus SEs as well as a scanner, laser printer and later a massive (at the time!) 19″ black and white monitor.

We hired a great friend who was our first “secretary.” It was a long discussion between Mitch and me whether we should since she and I had “dated” before. Since we had remained great friends and genuinely had no issues with each other, we did so. She brought a level of organization to the office that Mitch and I didn’t have. 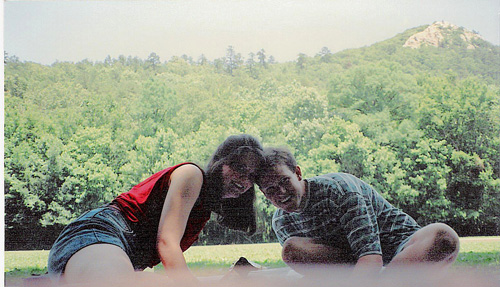 I say all that to say… that December I was feeling “funny” (more so than usual) about life and particularly my role as an entrepreneur. The more I’d taught collegiate Sunday School at Caddo Valley Baptist Church with Scott Duvall as my pastor, the more I kept sensing that God was “up to something in my life.”

It was after Caro left to go home that I ended up getting to spend a lot of time with Scott, one-on-one, talking about life, my future, Carolyn, and my relationship with Christ. He was instrumental in helping me see what I hadn’t accepted before – that God was “calling” me to serve Him in a unique, focused way.

I had always enjoyed serving His people, but I had never thought of myself as a minister. It was rather humorous for Scott to help me unpack the fact that since my freshman year in college, I’d served in various youth ministry positions and even as assistant to the pastor at Third Street Baptist Church before leaving there. He asked, “Where do you receive the most joy from working?” While I absolutely loved design and advertising, I had to say, “From serving God and His people through teaching and discipling…”

In my letters to Caro and on the phone that winter, I was processing with her all that meant. I was scared to death. To me, answering a “call” from the Lord was essentially saying “yes” to anything He asked. I knew it could mean the Middle East or the Orient or even Hawaii (I had my hopes up). 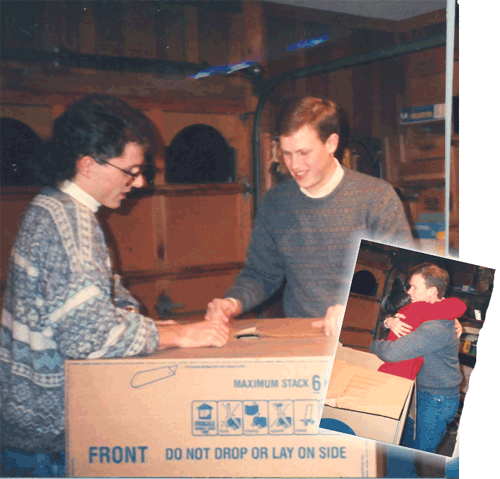 During all this, I was a little mopey about being separated from Caro during Christmas break. My birthday is January 5, and although Mitch and several buddies drove up to Little Rock for a party my folks arranged, I was a little bummed about Caro being gone. During the party, I was ushered into our garage to open a large birthday present with a bow. I had barely got the bow off when Caro jumped out of the box screaming and laughing (she was fully clothed, you gutter-minds!). Of course, I was thrilled – after changing my pants. So we got to spend my 23rd birthday together after all.

Over the next few days and weeks, Caro, Mitch, Scott and I talked deeply about the implications of my call to ministry – for me, for Mitch, for us, etc. I finally “surrendered” – and it was a big deal for me – to the Lord’s call that month and began making plans to enter seminary that fall.

Of course, that meant that Caro and I would be separated. She was just completing her sophomore year and would begin her junior year in the fall. Mitch and I began making business plans for our transition, and unbeknownst to me, Caro and Mitch began making some plans of their own…