Our Story: A Journey Begins

This “Our Story” series has become quite and epic, and I can’t believe it’s been four years since the last installment! So where did we leave off? Oh yeah, we were living in Monticello, and I’d shared with you in the last two posts about the joy of serving Christ with college students, traipsing around the world and then the birth of our two kids. Grab a cup of coffee, and a comfy chair and let’s pick up.

So, it’s about 2000. While we lived in Monticello, we had joined Second Baptist Church. We were blessed with a great pastor who loved teaching God’s Word and hunting (most of the time in that order). Sonny Tucker is now the Executive Director of the Arkansas Baptist State Convention, and Carolyn and I are still grateful for his ministry to us during that time. When Sonny resigned, Second began a search process for a new pastor. During that time, I had the opportunity to preach for Second on many occasions. It was humbling and yet enjoyable to speak regularly to such a diverse demographic.

As a BCM Director, I had been preaching all over southeast Arkansas since 1995. Whenever a pastor was going to be out of town, BCM Directors often got the call to “fill-in” for them. It was not unusual for me to be out of my church 2-3 times a month preaching at another. On one occasion, I showed up in Dermott to preach. Since I’d been at that particular church often, I showed up about 15 minutes prior to the service – no big deal, I thought. That was, until I walked in and Pastor Rick quizzically met me in the lobby.

“What are you doing here?” he said with a friendly drawl.

“Uh, I thought I was preaching for you today?”

“Uh-oh.” I knew I was supposed to be preaching for someone that day. This was before you could whip out your smartphone and doublecheck your email to clarify things. I was stumped. And worried.

“Do you know of anyone else in town that was going to be out today?” I asked. He seemed to enjoy my discomfort and found it funny that I had shown up at his church to preach.

“I do think Brother Jody was going out of town…” he said.

“That’s it!” I said. I jumped back into my car and sped across town to Brother Jody’s church. Thank goodness it was in Dermott and not another town. There was a very nervous deacon pacing the front steps of the church when I arrived. I think he would have had to preach if the fill-in hadn’t shown up.

As I was saying, when I preached regularly across southeast Arkansas and in Second Baptist, it made me think how to apply God’s Word and its beautiful truths to a wider demographic than just college students. It was challenging and deeply fulfilling. During Second’s search for a pastor, I submitted the name of a friend who had attended Ouachita with Carolyn and me: Shawn Barnard. At the time, he was serving in Texas, but being an Arkansas native, he was interested in coming “home.” 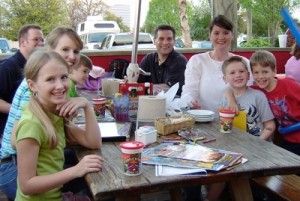 The Nobles and Barnards at Six Flags in Arlington, TX

One thing led to another, and Shawn and Jennifer moved to Monticello to lead Second. Those were exciting days, and I wasn’t sure how I felt about being older than my pastor for the first time in my life. Shawn led with grace, taught with creativity and weathered some difficult days at Second. One of the ugliest church business meetings I’ve ever witnessed (or care to) came during that time. The bride of Christ can be ugly at times. Maybe that’s what veils are for? At any rate, we didn’t leave when things got bad. We dug in and served and talked and worked hard to support our pastor and our church. Others became disenchanted and left. The students I served had a difficult time processing what they’d witnessed there as well.

As I processed and prayed, I began to get a growing sense that Monticello needed another church – not one born out of strife or conflict – but one begun with a clear vision and a fresh strategy that would reach the unchurched, disciple those that followed Christ and equip them for ministry to the community and beyond. I especially longed to see a church which would embrace college students and young adults and intentionally develop them as leaders rather than just urge them to attend services. I shared these thoughts with Carolyn one day as we were driving home from church.

“You mean start a new church?” she asked, with horror.

“Uh, yes.” I said with uncertaintly now, seeing the look in her eyes.

“Absolutely not,” she stated.

And that was our first discussion about church planting. Though all the rage today, church planting was not a part of our vernacular in the Bible Belt. Church planting was for areas of great darkness and lostness “out there” – like Toledo, or some such place that we’d never been. It wasn’t for our town that had churches on every corner. Yet, I kept praying, thinking and dreaming. The thought was like a pitbull scenting raw meat. It just wouldn’t go away.

In the middle of 2002, out of the blue, Carolyn asked one day, “Are you still thinking about starting a church?” I didn’t know if that was a question like a prosecuting attorney would ask or if it was one that an investigative reporter would ask. I was a little scared to respond. “Yes,” I said. Her next words would shape our next six years.

There had not been a precipitating event for her. It had simply been a consistent erosion of her internal objections. I hadn’t hounded her about it. In retrospect, we both simply know that it was the Lord. He had something up His sleeve, and He’d chosen us to participate in it.

We began to talk with friends in Monticello, current and former students. We prayed daily. We grew in confidence that a new church was what God was calling us toward. In an apparent setback, we discovered that the Arkansas Baptist State Convention (my employer as a BCM Director) would not allow me to do both – serve as a college minister and a church planter/pastor.

It had many ramifications. First, I’d need to find a way to keep okra on the table. Second, (and more worrisome at the time) was Carolyn’s health insurance. Due to her preexisting conditions (see this entry), losing group health insurance had huge implications. Finally, how would our church family at Second respond (and other local churches) as we pressed forward in faith?

Little did we know how the first question was partly already answered. Carolyn had started a photography business – a Noble photo – when we arrived in Monticello. God would prosper that business over the next six years. In addition, I started doing graphic design again, beginning a company I called Noble Design. Still, there were many, many months where the money ran out before the month did. We coined a phrase called “Miracles in the Mailbox.” It began one day when we found an envelope in our mailbox with cash. It hadn’t been mailed, just left in the box. It was, to the cent, what we needed to make it through that period. That would happen occasionally over the next six years, always anonymously. We are still indebted to the person(s) responsible who were used by God to bless us in times of great financial stress. It was always a message from Him: I am able. Trust Me.

“Every good gift and every perfect gift is from above, coming down from the Father of lights with whom there is no variation or shadow due to change.” (James 1:17) 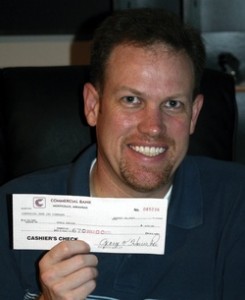 My first check from a Noble Design client – Commercial Bank

The health insurance question was never really solved. Rather, it was submitted. We transitioned over to Cobra, and then after it ran out, we began paying obscene monthly premiums through a conversion plan. It radically affected our finances, but the submission part became very real to us. Even through tears at times, we prayed, “God, you called us to this. We trust you. But help.”

The third issue was also a partial resolution. We remain grateful for how Shawn led the church to pray over and send us off one Sunday. He and many of the church’s leaders were wonderfully supportive. However, many others scratched their heads in confusion and myopia, wondering what in the world we were doing. As we said a grateful and heartfelt thanks to Second for their love and ministry to us and our children, we exited there with the knowledge that no local church in Monticello, no state agency would be helping us – at least financially – begin this new journey.

In January 2003, that’s what we called it. Journey. Journey Church. We began meeting in our living room on Jefferson Street with a small group for prayer, Bible study and vision casting. 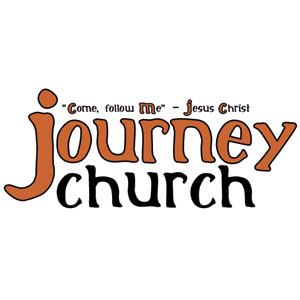