Our Story, blessings and rebuke, 1992

It was a rather glorious day in Tolar, Texas that May. Our families, friends, and the small church I was ministering with came together to celebrate with Carolyn and me our marriage and what we felt was simply victory. It had been a long, hard haul to May 1992 through cancer treatments, long-distance engagement, scholastic crunch and emotional upheaval. However, we had arrived, and with Kevin Wieser and Scott Duvall tag-teaming the wedding ceremony, we both euphorically said, “I do.”

We drove out of town that afternoon and didn’t return to Tolar, Texas. Rather, we had already moved some things to our new home in Garland, Texas where I would begin serving as a youth intern after we returned from our honeymoon. We went to Eureka Springs and simply had a ball. We laughed and played and ate and, well, honeymooned. 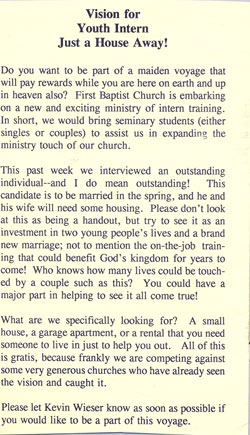 The previous March, Kevin Wieser had begun preparing First Baptist Church of Garland for a new youth ministry intern program. I was to be the first. Thankfully, he had more interns after me, so I guess it was a success. It was amazing how God worked out all the details of our ministry transition. Kevin ran a few articles in the church bulletin, and before long, an amazing couple, Barry and Dina Barlow, responded. Barry was going to be relocating out of town for a year to work and Dina and their daughter would be living with him there. That left their gorgeous town house home sitting empty. 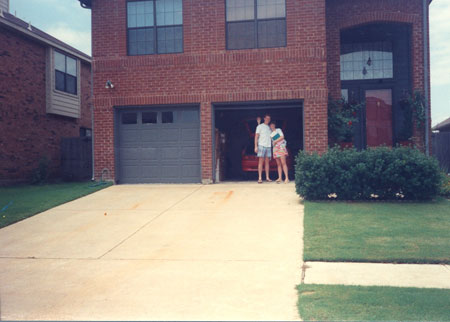 Upon our return from Eureka Springs, we settled into what for us was a palace. It had everything we could have dreamed about, including a hot tub on the back deck! Due to the Barlow’s ministry vision, we not only didn’t pay rent, but they sent us $100 a month to help with the upkeep and to “pay” us for house sitting for them! After the previous several months, we felt overwhelmed by the kindness of God in our lives. We began to make significant friendships in the church as well as see incredible spiritual fruit being developed in the lives of the youth.

I think everyone who knew us at the time and got to visit were amazed as well. In spite of our hardships, we truly were overwhelmed with love. I John 3.1 was a deep reality to us:

“How great is the love that the Father has lavished on us that we should be called children of God!”

Kevin and I laughed our way through youth ministry in those days. I started playing fantasy football with him, having to teach him everything about the sport. I’ve been in that league with some of the same guys for 15 years now! One moment in particular defined my youth ministry experience there and taught me a lot about humility…

As I recall, it was relatively early in that first summer. Kevin told me he had a job for me to do, so I asked what it was.

“I need you go out to the parking lot and clean the rocks out of the volleyball pole holes,” he said.

“I’m not doing that!” I said, indignant. I was “above” cleaning rocks from holes, I felt. After all, hadn’t I just left an associate pastor/youth ministry position? Did he not understand that?

I went out to the parking lot to clean rocks out of holes.

Somewhere over the years, that event has become one of my fondest memories because it was a lesson from my Lord. If He, being Messiah, could wash His disciples feet as an example of being a servant, I could certainly clean rocks out of volleyball pole holes.

A few short weeks after our arrival, Caro and I got to go to Falls Creek Camp in Oklahoma with the youth group. It is Arkansas’ Siloam Springs on steroids. It was huge, massive… and rustic. But we had a blast! Totally. We were in love with our youth, our church, and the great God who allowed us to serve Him in this way. 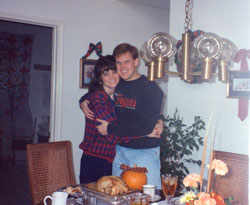 Caro had begun working at Nation’s Bank (now Bank of America) as a teller upon our arrival in Garland. It wasn’t long after that until it was time for us to “tithe” on our first paychecks. If you’ll recall, I had spent a lot of money on a ring, a Macintosh, and junk, assuming that I would be receiving several thousand dollars from the sale of my business in Arkadelphia. When that didn’t happen, my credit card companies did not graciously call me and offer to wipe my debt clean. Rather, the monthly payments on my cards seemed to prohibit our ability to tithe. Rather than rehashing the whole story, you’re going to have to go here and read it for yourself. Then come back here. (There’s also a version of the story here.)

I think one of the reasons that Carolyn may have been so insistent on giving was that she had received so much from the Lord. In hindsight and after years of experiencing profound provision from the Lord, I’m fairly certain that the Jeff of those days is indeed dead. I don’t mind sharing the story with folks simply because God taught me such a strong lesson in that rebuke that it changed my very nature and character. Don’t get me wrong – I’m still growing – but whether to tithe/give was forever answered that year.

Carolyn and I had been through so much in the past year and a half of our relationship. Those happy days at First Baptist Garland enabled us to settle down and begin to enjoy life. Things were extremely hectic, working with youth and living in a metropolitan area, but for the first time, we discovered the joy of routine.

Sometimes life is like a roller coaster and other times, it’s like a… box of chocolates.. wait, that one’s taken… like a west Texas highway – straight, flat, and predictable. We had put up the amusement park barf bags and were simply learning to drive between the lines.

It was nice… until the explosion…

By the way, you can see the “Our Story” Flickr album here.