Our Story: From planting to growth 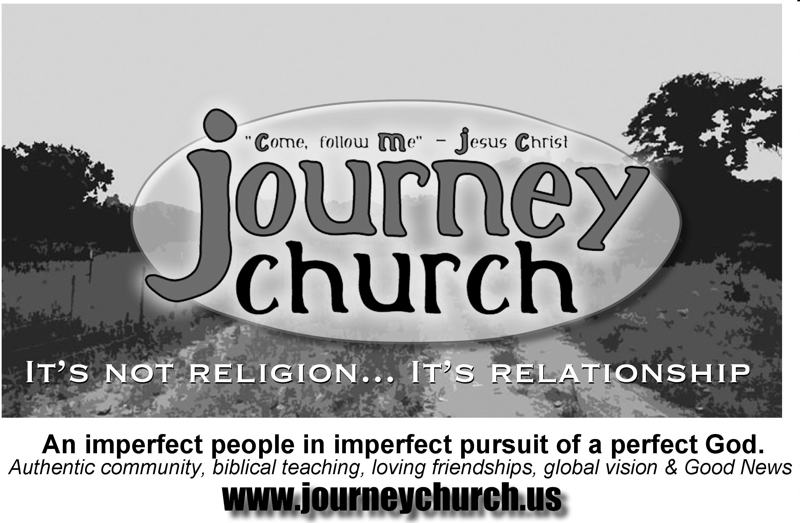 In my last post in the Our Story series, I said:

I began to get a growing sense that Monticello needed another church – not one born out of strife or conflict – but one begun with a clear vision and a fresh strategy that would reach the unchurched, disciple those that followed Christ and equip them for ministry to the community and beyond. I especially longed to see a church which would embrace college students and young adults and intentionally develop them as leaders rather than just urge them to attend services. I shared these thoughts with Carolyn one day as we were driving home from church.

Journey Church was launched in January 2003 as a small group of friends began to meet in our living room. Weekly, I shared the vision for a new expression of the body of Christ in our community. That August, my resignation from campus ministry became effective, and I transitioned into becoming a pastor for the first time in my life. 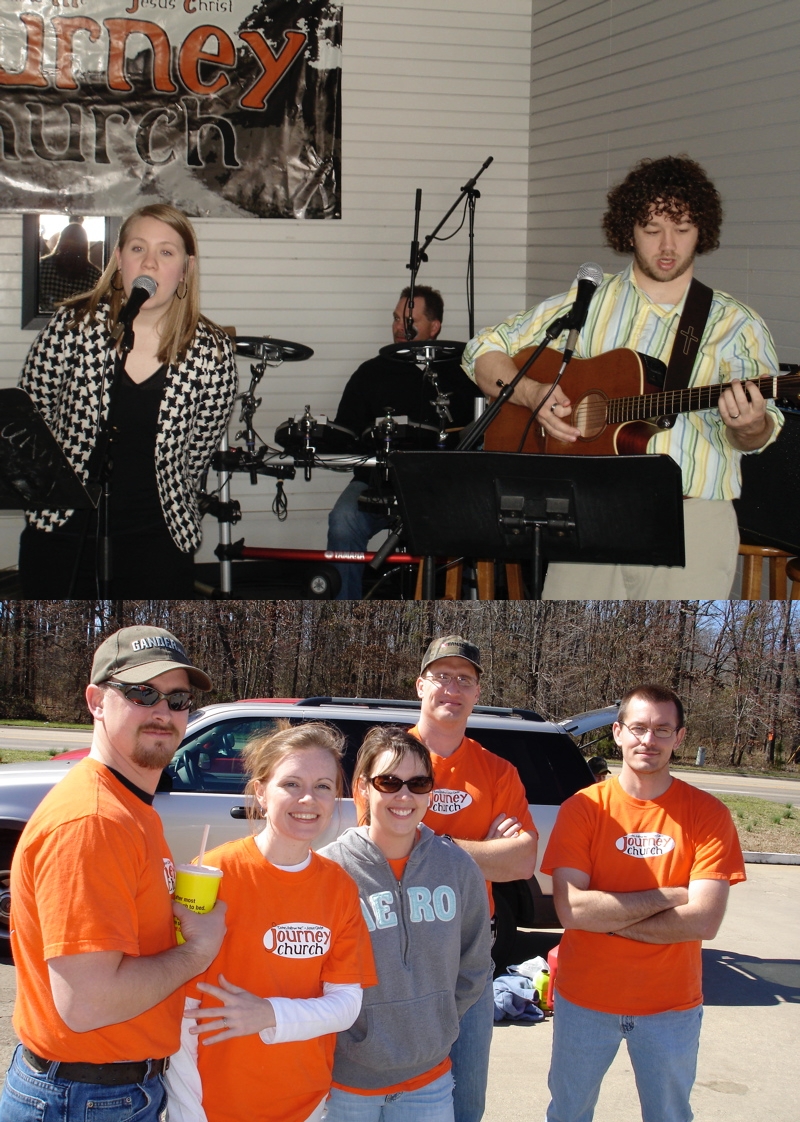 As I mentioned in the last post, I started a graphic design business to help pay the bills, and with Carolyn snapping pictures of everything that moved, our church planting adventure began. Our small but growing band of “Journey-ers” were a joyful, flexible group. We met in seven locations in our first three years – on the campus of the University of Arkansas at Monticello (the Baptist Collegiate Ministry, the Missionary Baptist Student Foundation and the Wesley Student Foundation), SeaArk Boats building, the Walmart shopping center (one spot at first and then two), and the Malco Theaters. It was truly a journey.

One of the things that developed quickly was excellent musical worship. It got off to a bad start, however, as I learned to play the guitar and would plunk away those first few Sundays. Thankfully, Ben Coulter jumped on board quickly and assisted us as a co-pastor and worship leader. He was followed by TJ Files who developed an incredibly praise band. Jeremy Woodall and others took the reigns after TJ was called to serve in another church as their worship leader.

Week in and week out, we saw God do amazing things our faith family. We were a tight knit group, but each family was coached and encouraged to have a vision for the “empty chair.” It was a concept we reiterated often – a chair that’s not full belongs to someone that’s not there… yet.

From Operation Christmas Child to family camps, community service projects (we went out one weekend and cleaned public bathrooms) to disaster relief (tornado cleanup in a neighboring town), we wanted to demonstrate that the church is not about a building, but about showing the love of Jesus to our neighbors. We didn’t want to just show them; we also wanted to tell them. Kind behavior without Christian content can be misinterpreted as us only being “nice” people. All our members were constantly encouraged to tell others what Jesus meant to them and to invite them to consider how much He could do in their lives as well.

The church grew consistently for four years, and in those years, we still had constant transition. Just when we’d begin to reach a full room, families would move. Others would “try Journey out” for a while and grow uncomfortable with the reality that we really intended to live our lives for Jesus. It wasn’t just a place to “go to church.” It certainly wasn’t Bible-Belt, comfortable Christianity. 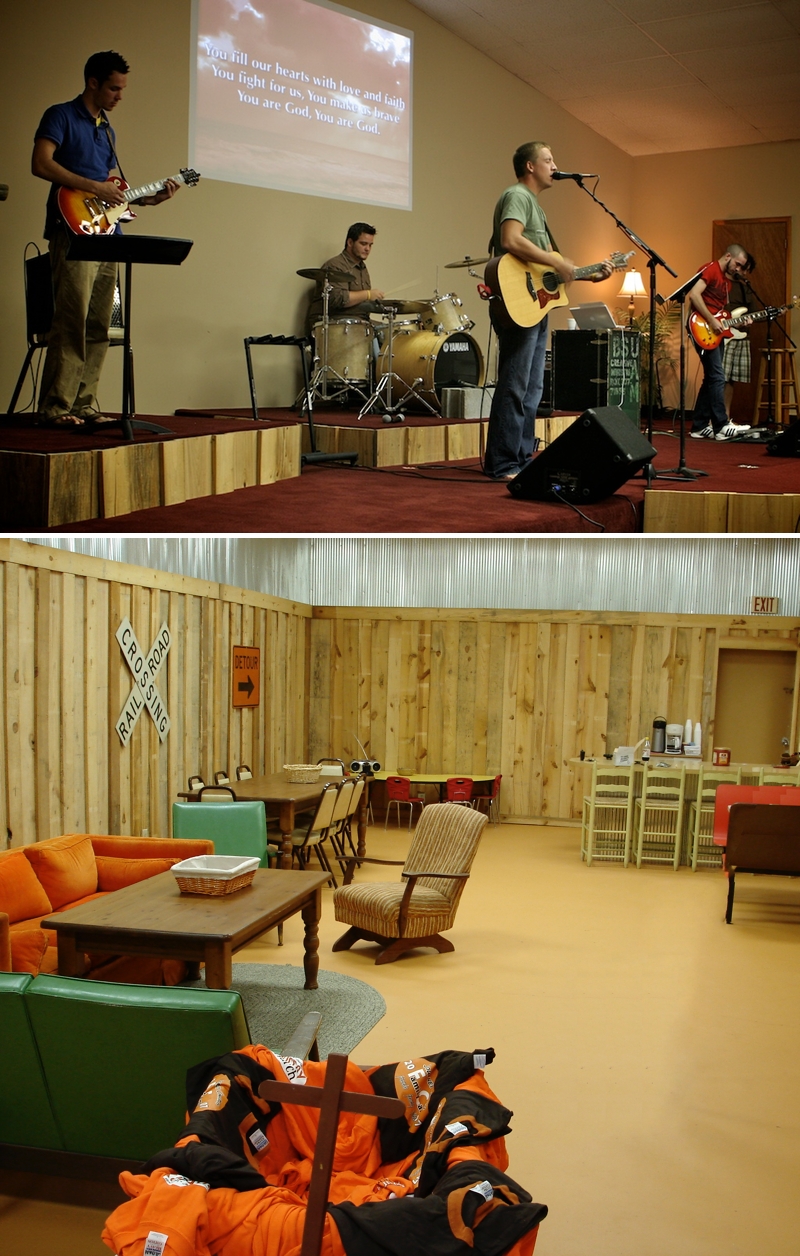 Our kids were in the middle of things with us, and it was a joy-soaked affair. It was also some of our hardest days as a couple. Finances were always an issue. We struggled mightily to simply make ends meet. There were days the church couldn’t pay our salary, and we’d just pray it through and encounter God’s gracious provision in amazing ways.

It was an amazing day when Journey purchased a building – a former church facility. It was a 5000 sq ft. metal building, and we renovated it ourselves, from top to bottom. We mudded wood paneling for days and then textured it and painted. We took the back room and made a cozy fellowship hall that we all felt was incredible as we lined the walls with donated wood torn from an old barn. As we moved in, we invited pastors from other churches in the community to our dedication service, and they kindly came to celebrate with us. In addition to being blessed with our own facility,  a local doctor donated land to us in a prime area in Monticello that could serve us if we needed to grow from the new spot.

Then came 2007. It was our “year from Hell.” That’s what we still call it today. It was that year that a group of faithful Journey members left all at once – a result of a lot of factors. I was called a lot of things in those horrible months. I even received a letter from one of the couples who left, telling me I was like Bruce Barnes in the Christian book series Left Behind. Pastor Barnes was “left behind” because he wasn’t really a Christian, only going through the motions. I described the aftermath to ministry friends later as like walking into cobwebs. You’d think the dust had settled, and then you’d be brushing away that uncomfortable presence of relational ickiness again in a conversation.

As hard as those days were, the leadership team of Journey came together, and we experienced uncommon unity and grace as we prayed hard through those days and sought God in the days ahead. The people of Journey stood by Carolyn and me in some of our hardest times. Through health crises, especially. It was not unusual at all to call one of the guys one afternoon or evening and say, “Hey, would you like to meet me up at the church to just.. pray?” That building was saturated with intercession and a people crying out to the Father – for our own families and lives and problems, but more often for our community and for those who wanted to come into a faith relationship with Jesus.

One thing that was affirmed in our lives during the six years I led the people of Journey was the power of the Word of God. Sunday after Sunday, I learned afresh how daunting and simultaneously joyful it is to simply let God’s Word do its work in His people. Combined with authentic worship, we consistently experienced the presence of God in our services. 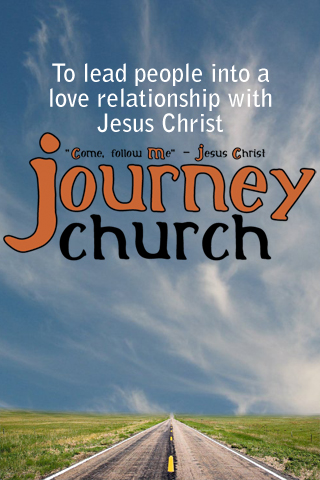 Our leadership team would meet on Thursday mornings at 6:00 a.m. Those meetings were some of the best of my ministry experience. Of course, they’d begin with one of us attempting to scare the daylights out of the other. If you arrived, and saw a car in the parking lot, and the lights were off in the building when you entered, you’d be pretty much guaranteed the need for an undies change in the next few minutes. One mornings, TJ hid under the kitchen sink. I still have no idea how he squeezed into that cabinet.

Journey began experiencing fresh growth and vision in 2008-2009. They were years of special connections, as we reached out to local churches more for partnership and even began forming a network with other new churches in Arkansas. As sweet as those two years were, we also saw some more key leaders leave – this time through healthy transition as jobs and other opportunities took them from Monticello.

It was toward the latter part of 2008 that I began to sense a transition ahead. Carolyn and I both felt it. We knew God was up to something. We even began asking the Lord for help and direction for “next.” We had experienced significant grace from some of the bruises and hard work of church planting’s early years, but we were just… ready. We’d been in Monticello for almost 14 years at that point.

Then one evening I got a phone call from an old friend… To be continued.