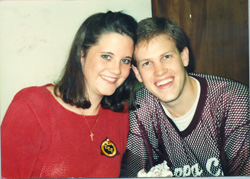 Being a senior at OBU had its ups and downs. One of the ups was the simply familiarity with campus life and a general laissez-faire attitude. Life was sincerely good. I was working with my best friend in “desktop publishing” (what is was called then), helping him edit a yearbook and writing a weekly humor column for the Ouachita student newspaper, The Signal. I was also senior class president; how that happened, I really don’t recall. I don’t remember bribing anyone, but maybe it was the promise of loaning folks my Levi Strauss purple jeans that pushed me over the top.

Mitch and I had moved off campus by this point. As I recall (and I’m open to correction), we were living in the Starlight Apartments, just down the street from OBU. With graduation just a few months off, he and I both faced our future with complete calm and assurance – unlike some of our friends who were still trying to decide what they wanted to be when they grew up. We began to fade out of our fraternity (called “social club” at Ouachita) and were simply relieved to know -as much as we could – what was around the corner career-wise for us.

Our plans were set. We were going to stay in Arkadelphia and run our ad agency. It had received some favorable press early on, and we hoped to establish an advertising empire there in Clark County.

As I said in part one of this epic, Caro and I began to develop a friendship that year that revolved around her helping me in youth ministry at a local church. Somewhere over the course of the spring semester, I can remember Mitch making consistent observations and snide comments about how much I seemed to talk about Carolyn. Indeed, we were talking on the phone just about every night by this time.

I was wrapping up an incredible four years at OBU while Caro was just finishing her first. As graduation for Mitch and me drew closer, I began to ponder what a Carolyn-less summer might look like. We had been on no dates. She still stuck by her guns as far as me not even being a candidate for dating. In fact, she seemed to relish my relational foibles and even would approve or disapprove of gals I hoped to pursue on my next Coke date. While she went out on a few dates here and there, she enjoyed hanging out with her friends and enjoying campus life.

Late into the semester, my Coke dating had dwindled so gradually that I had not even taken time to evaluate what that meant. I had simply begun to lose interest. Like a turtle, the realization simply crawled slowly into my mind. Somewhere over the past months, my relationship with Carolyn had blossomed into a unique and significant friendship.

I knew better than to broach the subject of a “relationship” for fear of ruining our friendship; however, the idea of DTR (define the relationship) became a consistent, gnawing thought in the back of my head. What were we? Were “we” anything?

Her friends and mine knew something was up a long time before we did, I believe. Carolyn came to my graduation, and we had some long talks just before school was out, but when classes were dismissed, she packed her bags into her 1987 Nissan Sentra SE and headed home for New Mexico. Her plan was to go home for a few weeks and then to return later that summer for summer school.

Mitch and I turned to finishing up the yearbook and wore ourselves out working. My time was not wasted idly. But in the quiet moments, an uncomfortable thought kept beating back and forth across my mind like a tennis match… I missed her.