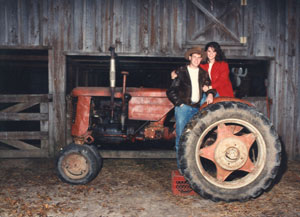 It was a rather strange caravan to Fort Worth that May weekend. I was driving my red Geo Metro (and no, the color red did not make it more “sporty”), towing a small U-Haul trailor will all my earthly possessions. Caro was following me in her Nissan Sentra with some of my stuff – but mostly hers, since she would be going on to New Mexico for a few weeks from Fort Worth.

These were pre-cell phone days, and we had devised a little system to keep us occupied. We had two mini-tape recorders, and while we were driving, we would essentially just ramble on with each other. We would talk about life, about stuff we saw on the road and about the future and past. About every hour or so, we’d stop, exchange tapes and listen to each other. It made the trip pass quickly.

In the quiet moments, I can remember praying and being mournful/expectant. It’s just hard to describe, even now, the idyllic life I felt I was leaving behind in Arkadelphia. Mitch and I had rented a house outside Arkadelphia a few months before, and it was incredibly peaceful. There was a pond out back that Caro loved to fish in. I would row her around while she caught all kinds of stuff.

I was thinking about all these things as I drove. However, I was also looking forward to my new job at Happy Hill Children’s Farm (no, they didn’t plant and raise them there). I was going to be a living unit coordinator in one of the junior high boys’ cottages. I would be starting seminary in August, and Caro had begun to map out a way for her to possibly graduate in three years, which meant we would only have to spend a year apart.

I had managed to sell my portion of Advantage Advertising for $15,000 and over the course of that summer, I started to live like it. I bought a brand spanking new Mac LC (looked like a gray pizza box), began collecting baseball and football cards, and a few other purchases.

One of those purchases involved a huge step of faith and commitment for me. Caro and I had been talking marriage for quite a while. I think we both knew that was the direction of our relationship the day I got off the plane the summer before. I truly couldn’t imagine spending my life with any other person. (Insert every corny, Jerry Maguirish, syrupy relational cliche here). To put it bluntly, I was not simply “in love” with Caro. She was God’s provision for me. At one point, I showed her how God created Eve as a “helpmate” for Adam, and she began signing her letters to me as “Your Helper.” We’ve done that off and on for each other ever since. I can’t think of a better way to describe how we saw one another – as best friends, companions, helpers, encouragers, and lovers. 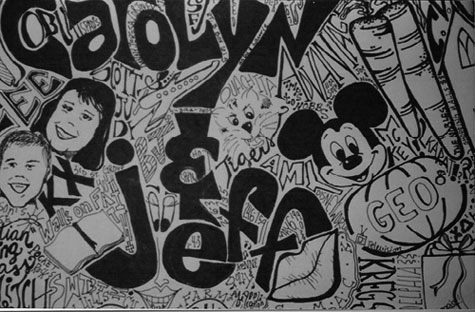 There was one moment on the trip that still means a lot to me. We had been driving through pretty constant rain, and it began to dampen my mood and hopes as well. All the questions like, “Am I doing the right thing? Am I crazy? What am I thinking?” were bouncing around in my head about seminary, moving, etc. We were about 15 miles southwest of Fort Worth, and we suddenly drove out of the rain. One moment, it was pouring, the next it wasn’t. However, as we crested the next hill, I was stunned by a remarkable sun-drenched vista. It was beautiful. The sun was setting in one of those gorgeous west Texas skies, and I remember saying into the tape at that moment something like, “Wow. I’m going to take this sunset and sudden clearing as a sign from the Lord that He indeed has a bright future for us.”

Caro helped me move in to my new apartment there at the children’s home, and then left the next day. She would go home for a few weeks before going back to Arkansas to live with my folks for the summer in Little Rock while she did a chaplaincy with Baptist Medical Center there. She returned to NM for the second summer term to take an Art course at the junior college in Hobbs.

I really began to enjoy my work at the children’s home. I met some incredible friends there, including Ben Phillips who started just a few weeks after I did. Gary Glover, John Morgan and others became great encouragers, and even though Caro and I were miles apart, we nurtured our relationship through phone calls and letters. (pre-email days as well!)

The biggest event of the summer happened in July.

I had met Carolyn’s youth minister, Kevin Wieser, earlier that year when he had come to Arkadelphia to bring some prospective students. (I think that’s why he came – can’t remember.) He was an OBU grad as well, and he and I and Mitch had hit it off. I can recall Caro’s consternation to find the three of us spending several hours trying to conquer Super Mario Brothers on the Nintendo rather than visiting with her.

I called Kevin in Hobbs and asked if he would help me with something… I wanted to propose to Carolyn. I wanted to do it in a place and in a way that would be especially meaningful to her. Since she was so involved in her church youth group, I wanted to propose to her on a Wednesday night – in the weekly youth group meeting called Joy Explosion. He happily agreed and arranged a night devoted to the topic of marriage and healthy relationships.

Long story short… I drove to Hobbs with my major purchase of the summer – a diamond ring. I planned to ask her to marry me on July 3 – exactly one year after I’d stepped off that plane in Hobbs with a commitment to “commitment.” I don’t remember much of the evening except my cue… Kevin introduced us to the youth group and said, “Isn’t it sweet that Jeff and Carolyn are here tonight, and they’ve been dating exactly a year today?” Caro turned beet-red, and said, “Kevin!”

He then said, “Ya’ll come on up here for a minute.”
Caro (and me too, honestly) cringed.
“Soooo, if you guys have been dating for a year already, what’s taking you so long? Jeff, have you thought about marriage?”

As Carolyn turned to Kevin in embarrassment (and hit him as I recall), I dropped to one knee. There was some gasps from the large crowd, but I was too nervous to worry about everyone else. I pulled out the ring, and as Caro turned back around to me, she saw me, on one knee, with a ring in my hand. I blurted out the question, knowing already in my heart her response. It was a joyful formality at this point.

Caro simply embraced me and started screaming/crying/laughing. At some point, I remember Kevin laughing and saying, “Well, what’s your answer?”

It was an incredible moment. As I’ve pored over pictures and memories telling this story over the past week, I still smile at this particular event. I relive it all over again. My heart was racing. I was terrified, honestly. Yet, I have never been surer of anything in my life. And I’d do it all over again today.

There were no moments to top the emotion of that moment for the rest of the summer. However, as Caro returned to OBU that fall, there was to come a moment that derailed us both…