Our Story, the rain falls on everyone

Carolyn’s junior year started out, in my opinion, much better than her sophomore year. For one thing, she was sporting an expensive diamond ring purchased at the fine gem establishment in Granbury, Texas known as Dave’s Jewelry. For another thing – and this is just my opinion – she was now living with the realization that she had been wrong on two important matters concerning our relationship:

I was convinced it was smooth sailing from there on out. After all, if your new fiancee starts off knowing that you are consistently right, then how can things ever go wrong?

All it took was a phone call.

Caro was selected to be on Ouachita’s homecoming court that fall, representing SELF (Student Entertainment and Lecture Fund… now, as an aside, I’ve got to say that the name of the club never made much sense to me. I mean, come on – raising money so that students could be entertained by a lecture? Seemed like a terrible waste of energy to me. But they knew a beauty when they saw one.)

Uh, Carolyn just now corrected me. She represented OSF – Ouachita Student Foundation, which is, of course, a much more prestigious (and less narcissistic) organization than SELF. However, due to the fact that I chuckled out loud at the creation of my previous paragraph, I will claim that I was right (after all, that’s how this part of the story begins) and chalk up Caro’s claim to the contrary as her attempt at revisionist history.

Back to the phone call… well, in a minute.

I flew in from Texas to escort Carolyn across the football field on that glorious Saturday. I was extremely proud to have this brunette on my arm. I’d never before escorted a Homecoming babe before. 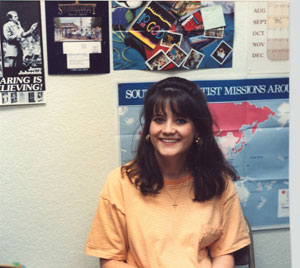 Things had changed for me in Texa, job-wise. Shortly after beginning my seminary studies, I’d seen an advertisement on the school job board for a youth ministry/associate minister position at Tolar Baptist Church – just 20 miles from the children’s home I was working at.

It had only taken me a few short months to 1) make some friends with my co-workers that would last to this day, and 2) to realize that I was most definitely not called to work at a children’s home. The highlight of my short stint there was consistently catching one of my junior high boys smoking in his room after hours. What made him think that cigarette smoke couldn’t be smelled out in the hallway? 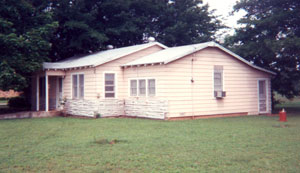 I applied for the position, was interviewed by Pastor Milton Perry (who became a very good friend) and began serving there. They even had a little house for me to live in. It was great. I was for the first time living completely by myself. I would have felt a lot more like Survivor Man if I wasn’t driving a Geo Metro.

Fade back to Arkadelphia. Stunningly gorgeous fall day and fiancee. I stayed through Monday, with Carolyn and her mom as Caro had to have a lump removed from under her arm. She’d had one in high school, and it had been removed as well – no big deal. 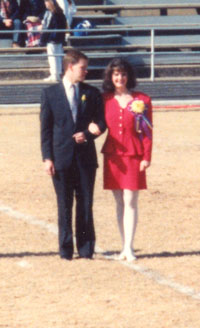 After the procedure, I drove back to Tolar.

I got the phone call the next day as I sat in my office at the church working on a paper.

The only thing I can really remember about that day is how unreal it seemed. I felt as if someone had pushed the pause button on the soundtrack of my life. My life music had been playing softly in the background for a while, and it was getting better and better. I wasn’t really paying attention to its melody; I just knew it was there.

The phone call brought abrupt silence, and I had no idea what tune (if any) I’d hear from that point out. The mention of cancer meant the worst to me, but at that very moment, it was as if a different track began to play. The music that began to reverberate through my soul had a different tempo and a majestic deep tone to it. It was not carefree but it was comforting. It progressed with purpose, and as Caro and I processed things on the phone, and I found myself strangely calm and providing comfort to her.

Carolyn’s mom was gracious enough to fly me back in to Arkansas for Caro’s doctor appointment in which he explained that the cancer was Hodgkin’s Disease and treatable. We cried together and found in the shock and quietness a deeper love and support than either of us could have alone provided for the other.

We prayed together and reoriented our life hopes and dreams to the reality of the next few months which would involve chemotherapy and radiation. (Caro reminded me she only had radiation, every day for 9 weeks. A different OBU friend drove her to Little Rock and back each day during that time.)

We had made some initial plans that fall to be married that next May, in 1992. Caro had figured out a way to graduate in three years if she loaded up on classes in the fall and spring and took summer school CLEPed Spanish the following year summer (she had taken the CLEP two other times and failed). Everything would have to happen like clock work.

However, at this point, the hands were frozen into position.