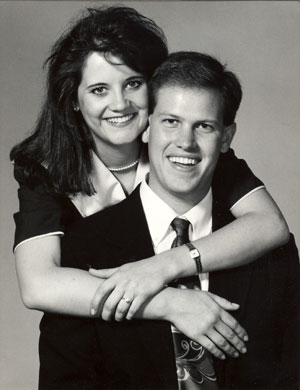 This is the first entry of Our Story.. a relational epic full of love, adventure, laughter, tears, and… life. It’s a story of a guy meeting a girl and of how they fell in love. It’s a tale of trust, joy and learning to navigate the unexpected turbulence of life’s rapids. I hope you check out the next entry linked below.

I think I was originally inspired to tell mine and Caro’s story by this entry by Lou. I’ve saved it on Bloglines for a while to remind me to come back and tell our story. Caro was watching TV in the bedroom – her nightly fall-asleep ritual when I went in a moment ago to snatch the photo off the wall to scan in.

“What are you doing?” she asked.

“Uh, I’m scanning this in for a blog entry,” I replied hesitantly.

“It’s not our anniversary,” she said.

Why is that women think that when men do something sentimental or special that we must be doing it as a gift or as a means to get out of the doghouse. And how did she know that the entry was going to be “special” or even “Steel Magnolia-ish?” Weird.

I was also really impressed by Guy’s recent addition to relational bliss, so here goes…

It was the fall of 1989 – my senior year at Ouachita, and I was single. My dating life at OBU was less than admirable. I mean that it kinda got out of control. I didn’t date at all in high school and so entered college as a dating rookie. I met a great gal from Mountain Home my freshman year, and we dated rather seriously for that entire year. I broke it off shortly before summer, as I recall, for no real reason other than the seriousness of it was giving me the heebie-jeebies. After all, I reasoned, didn’t I need to date around to find out what the big deal was all about? Enter complete relational recklessness.

Yup. My sophomore year at school was filled with several different relationships and the emergence of what I can only describe as “kissing buddies.” Yup, I was wading in the shallow end. However, I did get the opportunity to meet some incredible folks, and by the grace of God, I am friends with most of the girls I “dated” then. During my junior year, I dated a gal from Arkadelphia very seriously, but at that time I was also starting a graphic design agency with my best friend, as well as some other things, and well, life just got hectic and the relationship was neglected by me.

Enter senior year… 1989. Where we started before this reverie. It’s important to know the context behind “our story.” My senior year began to track along the same lines as my sophomore year as I “dated” several girls off and on. I embraced the opportunity that Ouachita’s social life afforded by making “Coke dates” socially acceptable. These were basically an evening at Sonic with someone that hopefully would tend toward the romantic. Yeah. Sounds completely ridiculous. But it worked then, and I’d be surprised if OBU students weren’t still milking the Coke date thing.

I was working at Third Street Baptist Church as the youth minister when I first met Caro. I was actually “dating” one of her friends. I was immediately attracted to her, and after a few conversations realized that she was not going to fall for the Coke date thing. It could have been the whole, “I’m not going to go “out” with Jeff Noble” thing that she told all her friends rather bluntly that clued me in.

However, our conversations socially became more frequent, and I realized the spiritual depth behind the outward beauty and charm. At the time, I was trying to recruit someone to teach a girls’ class for the youth at the church, so I asked Caro, and lo and behold, she accepted. My favorite time of the week quickly became our after-church discussion about the youth over dinner or a Frosty at Wendy’s in Caddo Valley.

Fall turned to spring, and I was set to graduate. I had no plans to move at the time due to the success of Advantage Advertising which seemed to be growing and doing well. Caro and my friendship had grown deep, and we talked just about every night on the phone. Many times, it was her belittling me for who I’d been “out with” the previous night. She’d made pretty clear all along that “we” would never be a factor.