The last few months have not been kind to a few megachurch pastors. This entry is written with great hesitance and, I hope, genuine humility. I’ve mulled over its tone and force for a couple of weeks now. You see, I am a pastor. I’m not in a megachurch; however, both pastors referenced in this entry did not begin with a megachurch.

Both have been castigated recently by news of questionable practices and decisions that they’ve made.

Mark is pastor of Mars Hill Church in Seattle and also the primary initiator behind the Acts 29 network of churches. Stephen is the pastor of Elevation Church in Charlotte.

If you’re not familiar with the negative press they’ve received, let me boil it down for you: 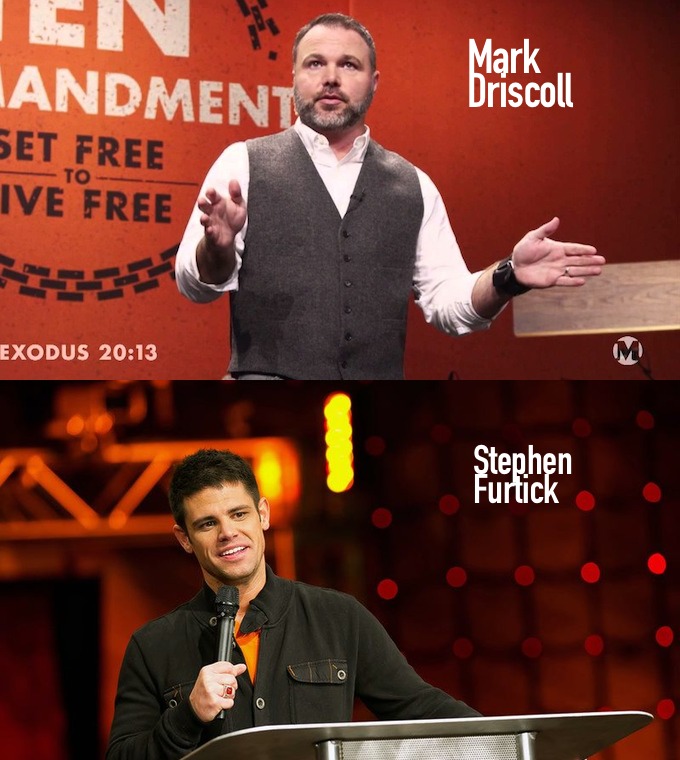 You know things are heating up when a website devoted to exposing you launches called driscollcontroversy.com and when a local NBC affiliate produces an expose on your church’s practices.

Back in 2012, Skye Jethani wrote an excellent article sounding the alarm about the market-driven creation of The Evangelical Industrial Complex & the Rise of Celebrity Pastors.

Every generation has had a handful of well known pastors, but why are there now so many? What explains the creation of an entire celebrity-class within the evangelical world? ..what is new is the number of celebrity pastors and the speed with which they are being created/coronated.

Jethani says that it’s not Christians who are creating celebrity pastors but the market. I disagree. The market is made up of Christians, you see, and we are like our Corinthian faith ancestors, clamoring for a leader to worship that is more like us. They too were lining up to popularize and claim a particular leader as their faith superstar:

Some of the super spiritual Corinthians trumped the rest by claiming “I follow Christ.”

Jethani says that it’s “our human proclivity for leader-worship” that is setting these leaders up for surreal success. Historically, Christians have never handled power and success well. We should not be surprised when ordinary men who love God may get caught up in crazy growth environments and begin believing some of their own press and the adulation of those around them.

The sad thing is that their success inevitably dictates what the rest of Christendom is exposed to, for it’s their books that get published and their voices we hear from stages at conferences.

This market-driven cycle of megachurches, conferences, and publishers results in an echo chamber where the same voices, espousing the same values, create an atmosphere where ministry success becomes equated with audience aggregation.

I love Jethani’s point about how our hero worship leads us to overlook faithfulness in small places:

And there’s a reason a brilliant, godly, wise, 50-year-old pastor with a gift for communicating, carrying a timely message, and leading a church of 200 in Montana is highly unlikely to get a publishing contract. And even if he does, good luck getting the stage at a conference or any marketing energy from the publisher; their efforts will be poured into the handful of megachurch pastors in their lineup whose book sales pay their salaries. It is exceedingly difficult to break into the club without a large customer base (a.k.a. a megachurch).

That’s a big statement, but I think it rings true. I don’t know that Furtick or Driscoll actually pursue celebrity or if it’s thrust upon them. Some may see celebrity as a path for strategic Christian influence, and I get that. However, celebrity is a dangerous status.

Pastor Tony Parker sounds off about it and our responsibility to it:

Offer prayer instead of criticism.

A healthy path for us all when our celebrity pastors stumble is to pray rather than prey. The old adage is still powerfully present in Christian subculture: “The Christian army is the only one that shoots its wounded.” There are way too many people who are quick to judge, prepared to pounce, eager to critize and itching to tweet (would that be twitching?).

Since Jesus commands us to love our enemies and pray for those who persecute us, should we treat Christian leaders more harshly? Even if they make poor decisions or pursue an unwise course of action, let’s offer grace. Ken Sande calls it making a charitable judgement:

“Making a charitable judgment means that out of love for God, you strive to believe the best about others until you have facts to prove otherwise. In other words, if you can reasonably interpret facts in two possible ways, God calls you to embrace the positive interpretation over the negative, or at least to postpone making any judgment at all until you can acquire conclusive facts.”

What if there is something wrong with your celebrity pastor?

Praying is all well and good, some may say, but what if something needs to be done? What if worse comes to worse, and it begins to look unhealthy for the church, both local and global?

Still, I would cite Sande:

“Jesus is not forbidding critical thinking in the positive sense, which means to evaluate others’ words and actions carefully so we can discriminate between truth and error, right and wrong (see Matt. 7:15-16). What he is warning us about is our inclination to make critical judgments in the negative sense, which involves looking for others’ faults and, without valid and sufficient reason, forming unfavorable opinions of their qualities, words, actions, or motives. In simple terms, it means looking for the worst in others.”

You can’t help but notice the hundreds of web articles that result if you type in either pastor’s name mentioned above. You can see where others have “called out” Christian leaders for deeper issues. Recently, Rick Henderson took Joel Osteen and Joyce Meyer to task as one such example. Todd Pruitt over at Reformation21 offers some concerns about how we should the view pastorate but also directly questions Furtick and Elevation Church’s wisdom in the “Cult of the Visioneer.”

Are these direct criticisms helpful? I don’t think so. It puts churches and pastors in defensive mode. Furtick responded last week that it was a “witch hunt.” That’s not helpful either. You see how the conversation produces heat instead of light?

I’m not saying we should suspend discernment. I’m saying we should pray for it among the members of the churches that may have celebrity-status pastors. Many of these leaders are amazing servants of the Lord, and their temptations are great due to the influence they wield. If you’re not a member of a church in which one of these leaders is being criticized, be wary of going public unless their teaching begins to directly contradict the clear teachings of scripture. If it’s just bad judgement calls or questionable practices, bite your tongue and make a charitable judgement. Embrace grace.

When we pray for these leaders and their churches, we should pray that God is honored and Christ is glorified. When we center on His fame instead of ours, He responds and moves in amazing ways.

“Therefore let us not pass judgment on one another any longer, but rather decide never to put a stumbling block or hindrance in the way of a brother. So then let us pursue what makes for peace and for mutual upbuilding.” (Romans 14:13, 19)

How have you responded? How do you think the conversation should be shaped?