Praying for our new President 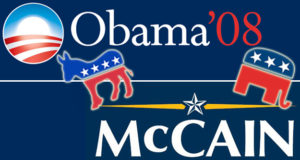 Ed Stetzer wrote an entry yesterday that I thought shared the appropriate spirit and tone for all of us who call upon Christ as Messiah and Redeemer – whether Red State or Blue State – in this significant political redirection for the U.S.

He quotes a letter from a Methodist pastor posted at Ben Witherington’s site:

There is always – always! – a “contrarian” bent to the Christian political angle. After all, in the Roman empire the complaint filed against Christians was “they are turning the world upside down” (Acts 17). In a world that does not love the Lord Jesus, we will expect to find ourselves at odds with business as usual; we shun a judgmental spirit, but we do not refrain from making judgments. “The Church is not simply a ‘voluntary association’ that may be of some use to the wider public, but rather is the community constituted by practices by which all other politics are to be judged” (Stanley Hauerwas).

Abraham Lincoln told the truth about “sides” who boast of God: “Both read the same Bible, and pray to the same God; each invokes His aid against the other. The prayers of both could not be answered… The Almighty has His own purposes.” Knowing this, we treat each other charitably, and look to God for something better: “With malice toward none; with charity for all… to bind up the nation’s wounds – to do all which may achieve and cherish a just and lasting peace, among ourselves, and with all nations.”

Stetzer goes on to say:

We’re about to choose a new leader for ourselves, and, regardless of who wins, some American Christians will be frustrated and disheartened. This is a difficult election for many Christians, but it should not– it cannot– eclipse our mission. And while politics and presidents can connect to the outworking of our faith, God uses the preaching of the gospel in word and deed to bring redemption to the broken, forgiveness to the sinful, hope to the lost and the real “change we need.” It is not an elected official who will transform the country, but the grace of God at work in his church– that is what changes lives, transforms cultures and turns cities upside down.

November 4th will come and go, but our mission remains the same, and our hope remains secure. That’s change we can believe in.

I wholeheartedly agree. After all, it’s not just wise and gracious, but as believers in Christ, we are citizens of another kingdom, with a higher loyalty. We must be able to minister to all peoples, and political polemic after an election cycle must be shelved in order to pray, encourage, and seek the good of the land we live in. This election may be about America getting what we truly deserve rather than what we want – whichever way we all voted.

“I urge, then, first of all, that requests, prayers, intercession and thanksgiving be made for everyone – for kings and all those in authority, that we may live peaceful and quiet lives in all godliness and holiness. This is good, and pleases God our Savior, who wants all men to be saved and to come to a knowledge of the truth.” (1 Timothy 2.1-4)

Also, the people of Israel were told to pray for a culture that was not their own when they were living in captivity in Babylon. This is rather strange, all things considered. Rather than urging them to pray for “deliverance,” they were instructed to pray for the prosperity and success of the culture in which they lived in captivity. This may be a more appropriate perspective for all those who bemoan the results of any election, present or past…

“Also, seek the peace and prosperity of the city to which I have carried you into exile. Pray to the LORD for it, because if it prospers, you too will prosper.” (Jeremiah 29.7)