ruminate |ˈroōməˌnāt|
verb [ intrans. ]
1 think deeply about something : we sat ruminating on the nature of existence.
2 (of a ruminant) chew the cud.

“Random Ruminations” may not necessarily be accurate because few of what you’ll see in this series will require deep thinking. However, it should make for some fun reading. I’ll be using it to post things I’ve seen and heard over a collection of days that caught my attention.

Who you follow on Twitter has become “the bookshelf” of this time. Remember when you used to go to someone’s house and look at all the books they had on their bookcase so you would know what they were interested in? (Today it’s) Twitter followers. that’s where you see it now… (via Karen Erren)

From The Weather Channel App on my iPhone:

I never understood why weather announcements are in all caps. I mean, they could be urgent, requiring you to assimilate the information as quickly as possible, yet they type in all caps, which, of course, is harder to read. OMG WATCH OUT FOR THAT TORNADO YOU WOULDVE KNOWN ABOUT IF YOU DIDNT HAVE TO READ ALL CAPS. ***

Oooow. My son just made me stab my brain through my nose. I was doing a pinky pick when he jammed my elbow. (Yes, this was my update, and it received a bunch of responses both on Twitter and Facebook where I posted it. My wife and mom were horrified.)

This iPhone app is my new addiction. Basically, you can play Scrabble with folks from all over. It only allows for two-person games right now, and I’d love to see the ability to play with more, but it’s awesome.

Adelyn was in The Nutcracker which performed at Burruss Hall at VT last week. This is a shot of her makeup prep. It was her third straight year to be in the production (her first here in VA). Go here for more Flickr shots. 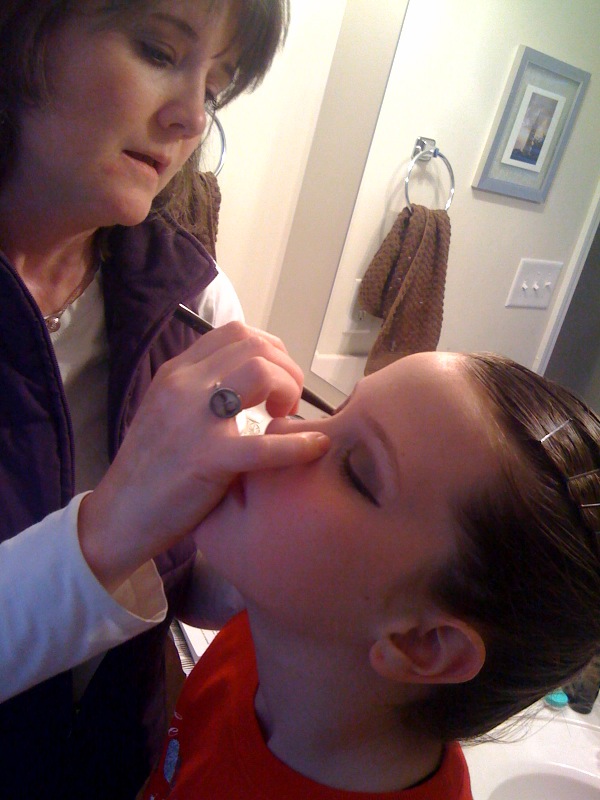