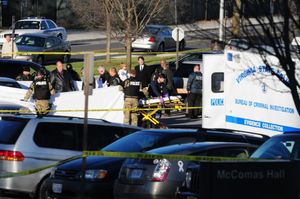 I was at lunch with a friend when I got a text. It said simply:

“Stay at the LH – apparently there were gunshots.”

My BBQ sandwich was right in front of me, but it seemed like a slow fog descended on the table. I read the text to my friend, and then did something that has become a habit for news and information. I checked Twitter.

It was crowded with reports of a gunman on Washington Street in Blacksburg. There was one person shot. Washington Street? That is where our church’s office is located, and it’s about 150 yards from the Virginia Tech basketball collosseum.

Then my phone began vibrating with texts:

“REPORT OF GUNSHOTS NEAR COLLOSSEUM!”

Lunch was over. I called Carolyn to let her know I was OK and then began trying to call Cody, our worship leader who had last been at the church office when I left. He didn’t answer his phone or the texts that I sent him. Within minutes, there were reports of a second shooting and another body. 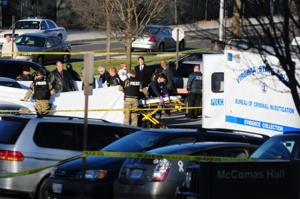 Source: The Collegiate Times of VT

There was a fist that began clenching my insides into the size of a golfball. I said a hasty goodbye to my friend, who had driven in from Salem for lunch and headed for the church office. My imagination and scattered thoughts were running faster than Seabiscuit.

Before the day concluded, we learned with the rest of the nation that the person shot on Washington was a VT police officer. The second shooting death (at the time of this entry) had been reported by many news agencies as the suicide of the gunman.

Cody returned to the Lancaster House (office) a few minutes after I arrived to find it empty. He had left his phone in his car while running errands. We spent the afternoon inside the locked house, tying Christmas cards on candy canes for our church’s float in a local Christmas parade. We listened to the police scanner and followed the Twitter feed. At one point, a stream of police cars, marked and unmarked, as well as a SWAT van and other rescue vehicles roared past our office headed to Squires Student Center where there reports of more gunshots. (Those turned out to be false. The scanner soon buzzed with the police demanding someone to tell the VT waste disposal folks to quit emptying dumpsters. That may have been the sound folks heard.)

News outlets ran far behind Twitter, another powerful example of the website’s influence in the transformation of our information avenues. As an example, VT’s student newspaper, The Collegiate Times, saw their Twitter following grow “by more than 18,000 — to more than 20,000 from 2,000 just before the news broke. The growth shows just how Twitter can amplify a single message, or a single account, even if that account is a college newspaper without a local following.” (Source)

But it wasn’t the power of Twitter or social media that taught me another lesson today. It was the power of God’s Word. This past Sunday, I preached from the gospel of Luke in chapter 21, verses 5-38. The message title was A Bright Hope in Dark Times. (podcast and notes here) In the middle of the confusion, fear and angst of the day, it seemed that a recognizable voice reminded me of one particular verse:

The context of the chapter is Jesus’ prediction of terrible times that were to come on the world and on Israel itself in the future. He urged His followers to not allow the darkness of the times to keep them out of the light.

It was easy today to get caught up in the heartache and drama of another tragedy in Blacksburg. I felt the fist in my stomach clench and release several times over the course of the afternoon. Cody and I prayed diligently for our campus and community, and for the families of those who had died.

Yet, the voice from Luke 5 beckoned quietly. It wanted my attention. It wanted my obedience. Jesus told His followers, “Do not be terrified.” It has been said that the Bible contains more than 350 commands for us to not be afraid. That’s a difficult imperative to obey in the midst of confusion, evil and death. Yet Jesus affirmed this other-worldy confidence in Matthew 10.28:

“..do not fear those who kill the body but cannot kill the soul.”

I hunted down a conversation I vaguely remembered in J.R.R. Tolkien’s Fellowship of the Rings between Frodo the hobbit and Gandolf the wizard:

“I wish it need not have happened in my time,” said Frodo.
“So do I,” said Gandalf, “and so do all who live to see such times. But that is not for them to decide. All we have to decide is what to do with the time that is given us.”

Profound words. We all live in dark times. Sometimes the darkness and evil is much closer than our hearts can stand. At times like today, it’s just down the street. But I take great comfort in the words of Jesus, and I encourage anyone who finds their courage faltering to consider them:

“Do not be terrified.”

God will supply all we need in dark times to shame those who love the darkness. He supplies courage to face tragedy with an unconquered spirit. He also supplies the very tears we shed over the brokenness and rebellion of this evil-stained world.

Let us mourn. Let us grieve. Let us heal. But let us not fear. Fear will forever cripple those who allow it to grip them. Let those of us who have experienced the love of God gently but determinedly display it when darkness seeks to swamp our faith with fear.

VT students are gathering tonight and tomorrow in candlelight vigils around the memorial to the students killed in the infamous April 16, 2007 shooting. Their lights urge us to remember lives cut short. Their lights also are a visible rebellion against darkness.

Let us rebel with them against the darkness of fear and the war it wages on our spirits.