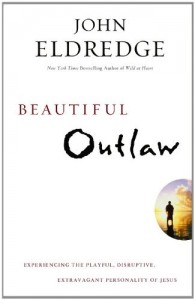 Beautiful Outlaw by John Eldredge is a book that I loved. And I hated. I want to recommend it to you with two significant caveats:

First though, make sure you glance at these three brief entries that I already wrote about parts of the book that provoked reflection:

The whole point of B.O., … uh, ok, let’s not abbreviate it… of Beautiful Outlaw is to introduce us to Jesus a very real, flesh and blood man with a deep, infectious and whole personality. John uses stories and examples from the pages of the gospels to shed light on Jesus’ temperament that have become ignored or sanitized through our familiarity with the stories themselves.

I really appreciated this about the book. I think the first half of the book is particularly excellent and worthy of reflection. I really believe any thoughtful reader will enjoy the Jesus that John is able to portray and reveal from the pages of scripture.

[In an age] where doubt masquerades as humility, passivity cloaks as rest, and emasculated indecision poses as laid-back enlightenment..

..the intense personality and fierceness of some of Jesus’ encounters will provoke you. If we don’t acknowledge Jesus’ humanity, John contends, we get this false image of Jesus as some kind of bland, sugar sweet, mercy-dispenser who offended no one. A careful reading of the gospels, on the hand, reveals a Messiah that was polarizing, even before He was crucified.

…his manner can be appreciated only in light of a deeper river flowing in him, this fierce intentionality. Otherwise, you get those popular and ridiculous portraits of Jesus as the wandering storyteller, no more controversial or dangerous than a clerk in a health-food store.

John covers several aspects of Jesus’ personality, but some of my favorites were his chapters on Jesus’ playfulness, generosity, cunning, and freedom. (chapters 1-3, 6, 8, 9)

It was the latter part of the book, when John turned toward how we should “let Jesus be Himself with you” that I began to notice an undertone to the book. I couldn’t put my finger on it initially, but then I nailed it, and its every occurrence became obnoxious.

It’s what I call bruising the bride.

In John’s attempt to portray Jesus as wonderfully real and worthy of our adoration, he constantly denigrated the “church.” It’s on almost every couple of pages, beginning in chapter 13, in a chapter ironically titled Loving Jesus. I didn’t know we had to tear down the church in order to love Jesus. As a matter of fact, I think you can’t do both.

It’s because in scripture, the church is the bride of Christ. When we belittle it or portray it as ugly, unloveable, and optional, we attempt to force a divorce between the Messiah and His mission. It was this fierce, playful, intentional, generous and cunning Jesus who said:

“…I will build my church, and the gates of hell shall not prevail against it.” (Matthew 16.18)

Let me show you what I mean by several quotes from the latter part of the book:

What would someone who is not a Christian and not part of a church walk away from this book with? I think they would have a greater appreciation for Jesus combined with a determination to never be involved with a church. The consistent undertone of the last part of this book undermines what Jesus expressly said He was doing. He was building the church.

Through these quotes and others, John seems to reveal a distrust for “they” (almost always religious leaders in the church) and a dislike for what the church produces or teaches.

Yet the apostle Paul spoke of the beauty of the church as an influence in our world:

To me, though I am the very least of all the saints, this grace was given, to preach to the Gentiles the unsearchable riches of Christ, and to bring to light for everyone what is the plan of the mystery hidden for ages in God who created all things, so that through the church the manifold wisdom of God might now be made known to the rulers and authorities in the heavenly places. This was according to the eternal purpose that he has realized in Christ Jesus our Lord.. (Ephesians 3.8-11)

I cannot conceive why it’s so trendy in Christian literature – by those who should know better – to tear down the church in order to elevate Jesus. It is Jesus who has begun a good work in us and will be faithful to complete it. We are all a “work” in progress. Insulting a man’s wife and thinking it will make people like her husband is not rational.

In addition, in the chapter Letting Jesus Be Himself – with You, John elevates people’s spiritual experiences and essentially says that if these experiences result in good “fruit,” then we should accord them the same authority as scriptural revelation. He literally says, “Either they accept the reality and adjust their theology, or they have to somehow deny millions of experiences.”

To the person who objects to this (John seems to anticipate it), he says, “But then – what do you do with Jolie’s story?” (Jolie is a young lady who has a dramatic spiritual vision of being at Golgotha and seeing Jesus crucified and hearing him say to her “This is for you.”) I am not arguing that she didn’t have the experience and that it didn’t produce genuine comfort and provoke transformation in her life. I’m simply uncomfortable with the door that equating spiritual experiences with scriptural truth kicks open.

It’s in this same chapter that John introduces the concept of “forgiving Jesus.” He shares another experience of a young lady who had a vision of Jesus in which He said to her, “You need to forgive me.”

“But Jesus doesn’t need our forgiveness!” you protest. I didn’t say he did. I said that you need to forgive Jesus – you need it. Let me be clear: to forgive a person, we pardon a wrong done to us; “forgiving” Jesus means to release the hurt and resentment we hold against him.

I understand what John is saying. I really do. So many people have felt let down and are disenchanted or bitter towards God. However, I feel this teaching is dangerous. To forgive not only means to release the hurt but to acknowledge a wrong or sin. Taken to this extreme, it can cast doubt on Jesus’ works and put us in the role of judge against Jesus.

That’s my recommendation. The first part of the book is so good, so beautiful and so descriptive of Jesus as a real person that it will provoke much thought and, I believe, lead you to deeper affection of and obedience. It’s the last part, where John tries to show a person how to relate to Jesus, that needs to be read with discernment. There are some real nuggets here as well, but you’ll need a shovel to dig them out at times.