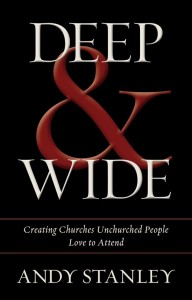 was one of the books I began 2014 reading with Dave Farris, our campus pastor in Pulaski, Virginia. Andy is the pastor of North Point Church near Atlanta, and his book Visioneering is on my short list of great books about vision. (review here)

At the outset, let me say that Deep & Wide is a book you should read. I’m splitting up my review of the book simply because there’s a lot to talk about it.

My overall takeaway is that it’s full of practical thoughts and convicting principles about how we as churched people should reorient our churches and ministries to be attractive to those who are not insiders. North Point is ruthless in its self-evaluation of ministries, practices and processes so that it can be “a church that unchurched people love to attend.”

On the other hand, I also “felt” – can’t really put my finger on it – that Andy and North Point may be flirting with pragmatism at points. Pragmatism and theology don’t mix very well. They’re like a Mac user at a Microsoft convention. One usually ends up arguing with the other.

Yet, our faith should work. I am concerned that the church unthinkingly adopts a “whatever works” mentality. I am earnest believer that how we do what we do deeply matters to God.

With that said, let me offer a some thoughts from the book that I found noteworthy.

I am encouraged by Andy’s continuous focus on Jesus and making Him known. I may quibble with some of North Point’s methodology, but I can’t argue with their laser-like focus. His ministry seeks to help reach people for Christ and equip and educate Christians on what living for Christ is all about.

What is our fuel?

Most church people don’t know what the church is or why it exists.

I agree with that statement, but Andy proceeds to say about the first century church, “It was led by men and women who were fueled not by what they believed, but by what they had seen.”

I’d violently disagree with that statement. It’s an unnecessary either-or statement. It’s radically clear in the New Testament that what they believed was what anchored their practices, faith and service to others. Yes, what they had seen validated their beliefs, but the apostle Paul was clear, “We walk by faith and not by sight.” (2 Corinthians 5.7) To say that the New Testament church was fueled by what they had seen is patently false.

To be fair, Andy is simply trying to point out that something happened in the first century. Something radical. It turned the Roman Empire upside down. Its genesis was in a small, backwater country, and yet it eventually brought Emperor Constantine to make Christianity the state religion of the empire. There were hearings, miracles, amazing deeds. The first century Christians saw these things. But it was not what fueled them.

If you think I’m splitting hairs (and I can’t afford to do that; have you seen the back of my head?), Andy’s very next chapter is titled Words Matter. His point? We need to be careful about how we communicate truth and reality, because, well, words matter. How we communicate what we communicate matters.

That is one of the frustrating realities for me in ministering in the 21st century. In our zeal, we often are thoughtless about how we speak about God, theology, truth and the church. Younger Christians spout off phrases that are tweetable but not livable. We have a dearth of folks who can think biblically. What we say and how we say it matters.

Just As I Ain’t

I grew up around people who believed the church was for saved people who acted like saved people.. The catch was that they were the ones who decided what act like a saved person meant. They got to determine which sins saved people could commit and which ones were evidence of being unsaved. Oddly enough, the lists changed every few years. Worse, the lists never coincided with any of the sin lists in the New Testament. For a long time, divorce was on the list. Interracial marriage was on there for a while as well. Greed was never included. Nor was slander or gossip. So those who were actually “tossed about with many a conflict, many a doubt, fightings within and fears without” didn’t feel free to talk about their fightings and fears in those churches. Instead, they covered everything up. Which, of course, made everything worse.. Transparency and honesty are dangerous in a church created for church people. Consequently, the casualty in a church for church people is grace.

Andy elaborates on how an emphasis on sin avoidance loses its perspective of grace, and other churches have responded by truly trying to avoid talking about sin period. Andy says, “The casualty in [these churches] is truth.”

So along with truth, sin becomes a casualty as well. But the New Testament is clear. We are not mistakers in need of correction. We are sinners in need of a Savior. We need more than a second chance. We need a second birth.

The problem that Andy points out so well is that churches have lost sight of their mission so much so that the lost aren’t even in their sight. We get consumed with making “our church” all about us and our preferences and stylistic desires. We actually allow ourselves to get offended when we’re admonished to embrace holiness and follow Jesus. We think, it’s not fair.

Read the Gospels and you will have a difficult time finding even one example of Jesus being fair.

I love how he unpacks the reality that our concern about fair treatment of others has paralyzed our churches from doing a lot of good.

I’ve worked in churches that tried to be fair. Eventually, fairness became an excuse for nonegagement. The quest for consistency became an excuse not to help. Before long, church leaders were hiding behind, “If we do it for one, we will have to do it for everyone.” To which I hear Jesus shouting, “No, you don’t! I didn’t!” .. The better approach is to do for one what you wish you could do for everyone, knowing that everyone is not going to be treated the same way. I’ve seen churches attempt to be consistent. But I’ve seen consistency get in the way of ministry.

Ouch. When I read this, I remembered a dozen conversations in our own church about how we should be wise about setting precedents in our dealings with one. While I’m still mulling over the implications of not being fair, I think Andy is on to something.

Here’s why. Apple fans know and love stories of Steve Jobs behind-the-scenes. Was he a jerk? Yes. No arguments there. However, there are literally hundreds of stories of Steve responding to a personal email from a customer. These stories are legendary, and most of his emails or communications were just one or two sentences, but his decision to respond to one didn’t make the rest of us Apple fanboys mad that he hadn’t responded to us all. They enhanced the perception that Steve cared about Apple, and he genuinely cared about those who used Apple products. I believe it’s the same way with other companies who are monolithic. When we hear stories of how a company or an exec responded in a particular situation, it reaffirms the overall esteem of that company because it shows that they are taking initiative. They just can’t take initiative for all. It would be paralyzing.