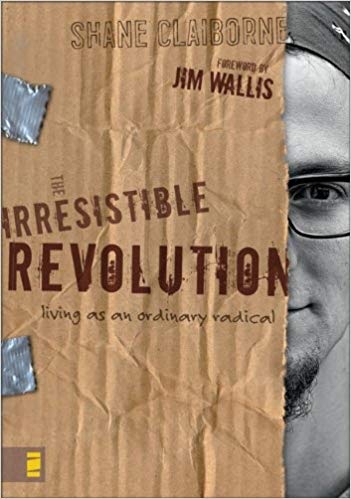 There have been few books that have been as provocative as Shane Claiborne’s Irresistible Revolution. As one of the primary architects/revolutionaries behind The Simple Way, the book is his group’s manifesto.

In it, you’ll read with edge-of-your-seat incredulity as he describes ministry activities in some of Baghdad’s bombed-out poor neighborhods, in India alongside of Mother Theresa and to lepers and also as an intern on staff at Willow Creek Community Church, one of America’s largest mega-churches.

His observations of American Christianity will have you nodding, and you’ll be amazed at the grace he shows in his assessment of our consumerism-consumed church culture. I would have been far harsher, I think.

However, some of Claiborne’s conclusions are still taking cheap shots at my previously-unquestioned assumptions about the poor, politics, war, and church.

Claiborne says, and these will be proof-texted and summarized:

“All around you, people will be tiptoeing through life, just to arrive at death safely. But dear children, do not tiptoe. Run, hop, skip, or dance; just don’t tiptoe.”

I’m still processing, I confess; however, I deeply appreciate any book, thinker, or leader that simply does that… make me think deeply. While I am not stepping forward to embrace all that Claiborne advocates, I am moving forward. No one can say that they are following Christ and stay where they are.