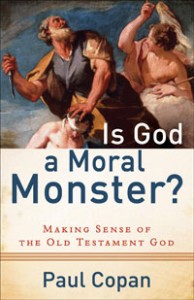 One of our church’s small groups has recently read Paul Copan’s book Is God a Moral Monster? Having not heard of Copan before they requested its use, I researched and was impressed by his approachable, scholarly technique in communicating difficult biblical subjects. Even Danny Hays, a professor at my alma mater, was one of those who reviewed and recommended:

“This is a very readable book, and it will be a valuable resource for all Christians who desire to understand the Old Testament in today’s context. I heartily recommend it!”

This review may become a multipart review (as designated above by “Part 1”) as I’ll try to respond and review the books as a I read through it. An overall summation of the book, I’m seeing, would be hard since Copan tackles so many different topics. His intent in writing is not only to equip Christians in understanding how difficult theological principles are expressed in the Old Testament, but he’s also responding to the New Atheists.

The New Atheists are those people who in recent years have undertaken a fresh attack on biblical authority and the very existence of God. Copan provides an easily-read resource to respond to many of their objections (and even sneering belittlements) of some admittedly difficult parts of the Old Testament.

In his description of the New Atheists, Copan says that “for all their emphasis on cool-headed, scientific rationality, they express themselves not just passionately but angrily.” In addition, he boldly claims that their arguments and writings against God’s existence are “surprisingly flimsy, often resembling the simplistic village atheist far more than the credentialed academician.” He calls out the “four horsemen” of New Atheism – Daniel Dennet, Richard Dawkins, Sam Harris and the late Christopher Hitchens and expressed incredulity that “so many have been intellectually swindled by such fallacious argumentation and blustery rhetoric.”

Quoting sociologist Rodney Stark, “To expect to learn anything about important theological problems from Richard Dawkins or Daniel Dennett is like expecting to learn about medieval history from someone who had only read Robin Hood.”

If you’re a believer and have been cowed into embarrassed silence by pseudo-intellectual arguments about the unreliability of scripture, know that there are amazing resources and credible responses by biblical scholars such as Copan’s work to assist you in being obedient to the apostle Peter’s exhortation in 1 Peter 3.15:

“always being prepared to make a defense to anyone who asks you for a reason for the hope that is in you; yet do it with gentleness and respect…”