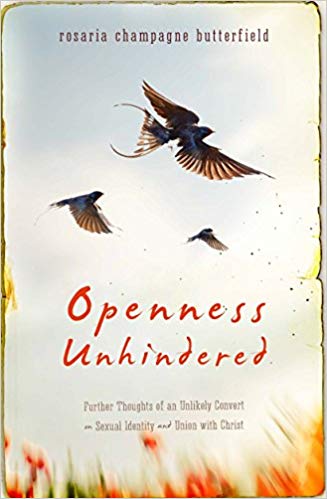 “My feelings fell with the fall.”

That one succinct statement encapsulates Rosario Butterfield’s excellent work that further details her journey of sexuality from heterosexuality to lesbianism back to heterosexuality. As a former professor of English and women’s studies at Syracuse University, this book follows here previous biographical work The Secret Thoughts of an Unlikely Convert: An English Professor’s Journey Into Christian Faith. When I read her first book, it was enlightening to explore the struggle of a non-Christian who became a Christian and then re-embraced homosexuality.

Openness Unhindered picks up where Secret Thoughts left off, and it is beautiful. Butterfield is candid and vulnerable. She displays her commitment to biblical truth even as she weaves words in ways that demonstrate her love of language and communication.

There are seven chapters, and five of them are truly significant contributions.

Anyone wanting to know how to relate with Christian humility and grace to those struggling with sexuality issues will find her work a help. Those struggling with same-sex attraction or unwanted homosexual desires will be encouraged. Those who find their identity in their sexuality – whether heterosexual or homosexual – will be challenged by her explanations of how sex was never meant to define our identities.

The way she unpacks the entire sexual orientation fallacy force fed to us by Freud is challenging. I found myself wanting to disagree with her initially, but after careful reading, her points are valid and merit more comparison to scriptural truths. She explains:

“because of the unwitting deceitfulness of the sexual orientation paradigm, we are much more likely to be numb to heterosexual sin and excessively focused on homosexual sin.. Heterosexual blindness makes a Christian ignorant to the very sins that may destroy him; homosexual approval makes a person unable to enter into a gay neighbor’s life in a way that God may use to spare him from God’s wrath. Both take Christian witness out of the game.”

Her chapter on community is unrelated to the issues of sexuality that the rest of the book delve into. Rather, it’s a wonderful description of what true Christian hospitality can look like, This chapter was so good that it belongs in another work that expands on how Christians can be better, literal neighbors.

I spent 2017 doing a lot of reading on the issues of sexuality, particularly homosexuality. I believe Christians must be well-read and good listeners in this area. First we must know what scripture clearly teaches about human sexuality. Second, we must be prepared to demonstrate a life of grace and truth to our culture, family members and friends. Our sexual struggles are as old as mankind and aren’t going away soon. In a culture that lacks intelligent, civil dialogue, it’s past time for Christians to shine brightly as ministers of wisdom, truth and love.

You may not have heard, but in July 2019 Amazon made the decision to begin banning the sale of books that communicated anything related to coming out… of the gay lifestyle. Books that advocated reparative therapy (a disputed treatment) or books that promote the possibility of transitioning from a homosexual to heterosexual lifestyle were removed. If you try to buy Openness Unhindered from Amazon, you’ll notice it lists for $26 as a paperback and is unavailable except from third-party sellers. That’s why you’ll want to go to christianbook.com to get your copy for $12.99. I’d also encourage you to make others aware of this horrid censorship of a Christian worldview of sexuality by Amazon.