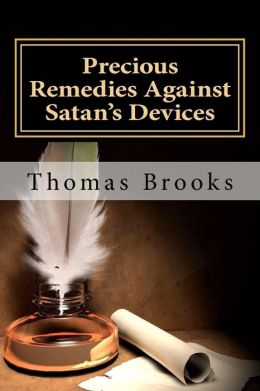 One of my annual goals is to read “an old dead guy.” I’ve found my reading to be deepened and my soul to be profited by reaching back into Christendom’s annals and being served by the saints who have gone before us. In truth, it’s always difficult for me to return to reading “contemporary” Christianity. Recent (in the past 30 years, and especially anything that’s a “best-seller”) tends to be shallow, devoted to self-help and empty of theological foundations.

Thomas Brooks’ work Precious Remedies Against Satan’s Devices is a refreshing and bracing book that reminded me at first of C.S. Lewis’ Screwtape Letters. In Screwtape, Lewis is able to give the reader a behind-the-scenes look at how Satan thinks and operates toward Christians as he portrays an ongoing dialogue between two demons intent on wrecking the life of a Christian.

Brooks, on the other hand, writes with broadminded insight and a depth of wisdom about the strategies of the devil to “steal, kill and destroy.” His work is direct, clear and well-reasoned. It is a sobering challenge and encouragement to the believer to fight the good fight. Though Brooks (1608-1680) wrote almost 400 hundred years ago in England, the application and wisdom of this book – apart from some of the language, sounds like it could have been written yesterday. (Speaking of language, I chuckled a few times when her referred to Mary Magdalene as “that notorious strumpet.”)

Remedies offers what Brooks identifies as some of Satan’s most well-used and time-worn strategies to distract, divide, discourage and destroy people. I’ve copied a list of the actual strategies below, but the book is about remedies, not just the strategies. So each strategy is followed by a list of well-reasoned, biblically-centered and soul-refreshing ways to respond to evil’s intentions.

One of the most challenging thoughts in the book for me was his identification of ignorance as a strategy of Satan. Too many modern Christians are exactly what the apostle Paul said we shouldn’t be: ignorant of Satan’s designs. (2 Corinthians 2.11) It is ignorance, as Brooks says, that “is a sin that leads to all sins.” (158) He says that Satan wants to get people to:

…esteem ignorance, and to neglect, slight, and despise the means of knowledge. Ignorance is the mother of mistake, the cause of trouble, error and of terror; it is the highway to hell, and it makes a man both a prisoner and a slave to the devil at once. Ignorance unmans a man; it makes a man a beast, yes, makes him more than the beast which perishes. There are none so easily and so frequently captured in Satan’s snares – as ignorant souls. They are easily drawn to dance with the devil all day, and to dream of supping with Christ at night. “My people are destroyed for lack of knowledge.” (Hosea 4.6) “You are in error because you do not know the scriptures or the power of God.” (Matthew 22.29)

In our biblically illiterate culture (and church), it’s no wonder that so many Christians embrace what “feels” right rather than seek to align their life with truth and God’s will as revealed in the Bible.

Here’s an outline of Satan’s devices. I’ve included links for fuller outlines with the remedies below:

SATAN’S DEVICES TO DRAW THE SOUL TO SIN
1. By presenting the bait and hiding the hook
2. By painting sin with virtue’s colors
3. By the extenuating and lessening of sin
4. By showing to the soul the best men’s sins and by hiding from the soul their virtues, their sorrows, and their repentance
5. By presenting God to the soul as One made up all of mercy
6. By persuading the soul that repentance is easy and that therefore the soul need not scruple about sinning
7. By making the soul bold to venture upon the occasions of sin
8. By representing to the soul the outward mercies enjoyed by men walking in sin, and their freedom from outward miseries
9. By presenting to the soul the crosses, losses, sorrows and sufferings that daily attend those who walk in the ways of holiness
10. By causing saints to compare themselves and their ways with those reputed to be worse than themselves
11. By polluting the souls and judgments of men with dangerous errors that lead to looseness and wickedness
12. By leading men to choose wicked company

SATAN’S DEVICES TO KEEP SOULS FROM HOLY DUTIES, TO HINDER SOULS IN HOLY SERVICES, TO KEEP THEM OFF FROM RELIGIOUS PERFORMANCES
1. By presenting the world in such a garb as to ensnare the soul
2. By presenting to the soul the dangers, losses and sufferings that accompany the performance of certain religious duties
3. By presenting to the soul the difficulty of performing religious duties
4. By causing saints to draw false inferences from the blessed and glorious things that Christ has done
5. By presenting to view the fewness and poverty of those who hold to religious practices:
6. By showing saints that the majority of men make light of God’s ways and walk in the ways of their own hearts
7. By casting in vain thoughts while the soul is seeking God or waiting on God
8. By tempting Christians to rest in their performances

SATAN’S DEVICES TO KEEP SAINTS IN A SAD, DOUBTING, QUESTIONING AND UNCOMFORTABLE CONDITION
1. By causing saints to remember their sins more than their Savior, yes, even to forget and neglect their Savior
2. By causing saints to make false definitions of their graces
3. By causing saints to make false inferences from the cross actings of Providence
4. By suggesting to saints that their graces are not true, but counterfeit
5. By suggesting to saints that the conflict that is in them is found also in hypocrites and profane souls
6. By suggesting to the saint who has lost joy and comfort that his state is not good
7. By reminding the saint of his frequent relapses into sin formerly repented of and prayed against
8. By persuading saints that their state is not good nor their graces sound

The last two chapters also contain “Seven Characters Of False Teachers” and “Six Propositions Concerning Satan And His Devices.” His assessment of false teachers is spot on. One of the descriptions he offers: false teachers “stand most upon those things that are of least importance and concern to the souls of men” – sounds like modern American Christianity. Too many times, we see teachers/authors making a big deal of the obscure in a creative way such that it delights our imagination and distracts us from foundational truths.

Remedies is not just a book. It’s a message. Brooks sounds like he’s planted a bug in the war room of Satan himself and is spying on the enemy for our benefit. I’d strongly encourage you to read this work by an old dead guy. Not only will you be encouraged, but you’ll be better equipped to “resist the devil” and watch him “flee from you.”