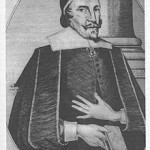 Jeremiah Burroughs was one of the great unaffiliated preachers of the 1600s. He was only 45 when he died, and being born in 1599, he reaped the fruit of the Protestant Reformation that swept Europe while at the same time making contributions of significant depth through his writings.

The Rare Jewel of Christian Contentment is a ponderous read. I’ll admit that at the beginning. It’s not full of witty anecdotes or alliteration. It’s depth, however, has made me compare other current Christian books I’m reading to wearing floaties in the baby pool.

It’s tempting a review to quote from Burroughs’ book, but to do so at length would be impossible. I’ve underlined more than I left not underlined in it. I hope to read through the book at least every other year. It’s that good. That challenging. 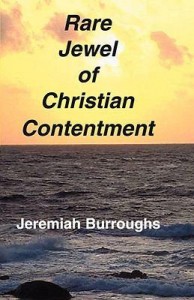 In a Mini-Cooper society as ours, his book reveals that we also have mini-souls. We are so easily discouraged. We have become content with being discontent. He offers chapter by chapter, practical and spiritual advice for pursuing and seizing a distinctly Christian contentment.

He urges all of us to get out of the shallow end and go deep into contentment with Christ. It requires a ruthless self-examination of all that we are currently seeking contentment in. He then urges us to press higher (and deeper) by seeking our heart’s contentment in only those things designed to truly satisfy our hearts.

So a Christian coming to contentment is as a scholar in Christ’s school… Just as no one can be a scholar unless he learns his ABC, so you must learn the lesson of self denial, or you can never become a scholar in Christ’s school and be learned in this mystery of contentment… You cannot all be scholars in the arts and sciences in the world, but you all may be students of your own hearts…study the book of your own hearts.

The book is direct and full of heart-rending questions for the sincere and humble Christ follower. In your diligence to read, do not pass by the well-guided missiles that seek to destroy your false contentment. One example of such a question is:

Philippians 4.13 has been greatly abused and seized by everyone from conquering politicians to athletes who believe in the rightness of their cause or effort:

I can do all things through him who strengthens me. (ESV)

However, the context of this amazing but abused verse is found in the depths of Paul’s entry into the school of Christian contentment:

As Paul’s life demonstrated, his seizure of the knowledge of how to be content enabled him to sing with joy in prisons and survive with perspective stonings. He had gone deep.

If contentment is something that eludes you, or if you fear that yours is a shallow, uninformed kindergarten contentment, I’d urge you to pick up a spade and dig in the Rare Jewel of Christian Contentment.

You can also get the Kindle version for only $1.99 here!