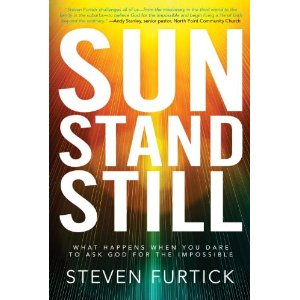 Stephen Furtick is pastor of Elevation Church in Charlotte. He’s a dynamic communicator, and his church has seen wonderful numerical and spiritual growth. It was planted in 2006, and within a year, it was running over 1000. At last report, they were tallying over 8000 in worship on Sundays on multiple campuses.

I wrote a review on the church’s website back in 2007 when I was doing a series on helpful ministry websites. I had no idea then that Elevation Church would become a megachurch or that Furtick would become the popular preacher he is today.

I recently heard him speak at the Refuel Conference in Lynchburg, and he was as I’ve heard – powerful, animated, humorous and convinced. He preached a message of encouragement and challenge (watch it at the link) to the gathered ministers.

With that said, I believe I can recommend Sun Stand Still to you with qualifications. If you’ve been a Christian for a while and are a reader, I doubt this book will be anything worth reading. If you’re new to the faith or are not a reader, this book is a good first start.

Furtick’s premise is based on an obscure passage in the Old Testament (seems to be the in thing for preachers/writers these days). In Joshua 10:13-14, God answered a prayer of Joshua’s by stopping the sun’s path across the sky for several hours. The Israelites had been promised victory over their enemies, but with encroaching darkness, their enemies would be allowed to escape in the night. So Joshua prayed what Furtick describes as a “sun stand still” prayer – an audacious prayer in his words.

The rest of the book is peppered with stories and examples of people who have experienced God’s unusual work in their lives as a response to prayer. He then uses the second half of the book to instruct and urge the reader forward in audacious prayer.

The book is an easy read, and if you’re looking for a book to give as a gift to someone who needs to be encouraged to keep going, to trust God, or to reignite vision in their life, it would be an appropriate book to give.

I would not suggest giving it to a well-read Christian. It is repetitive and other books and authors have written on prayer in ways that are more instructive and substantial. Furtick’s chapters come across as just scratching the surface of the beauty of prayer.

Some books I’d recommend (and please comment on others you’ve read and are familiar with):

FTC Disclaimer: “I received this book for free from WaterBrook Multnomah Publishing Group for this review.”