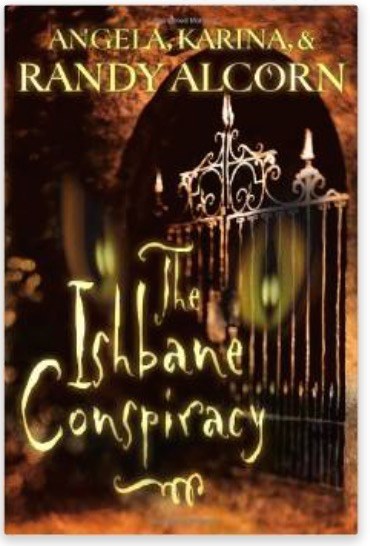 Randy Alcorn is a Christian author who has written some fantastic fiction and nonfiction. I appreciate his breadth of creativity. I loved his fiction series of Deadline, Dominion, and Deception. In addition, his nonfiction The Treasure Principle, The Grace and Truth Paradox and The Purity Principle are short condensations of larger books that are well worth the read.

The Ishbane Conspiracy was an intriguing read for me – at the outset. When it became available for review through the Blogging for Books program, I immediately requested it. It’s cowritten by Randy and his two daughters. When I began reading it, I was excited also to discover that it’s essentially a followup to his Lord Foulgrin’s Letters. Letters was a modern version of C.S. Lewis’ best-selling book The Screwtape Letters in which Alcorn intersperses the the story about a family and one demon’s attempt to destroy them and the tactics the demon uses.

In Ishbane, it’s a different demon trying to destroy different characters – this time teenagers (a perspective aided by the co-authorship of Alcorn’s daughters). I was three chapters in before… I had to put the book down – and I rarely stop reading books. The dialogue between the characters was just too trite. The interaction of the demon with his superiors was just too tame. The plot was entirely too predictable. The interspersion of demonic letters with teenage interaction was simply a rehash of former books, attempting to use the same formula with new characters. If you step away from the format long enough, you’d have to ask, “Why are demons writing letters to one another anyway?”

Before you mark the book off your “read list,” let me emphasize the idea behind this book is enlightening. Understanding that a demon may not want to possess you but simply distract you from following Christ (and the means that are used to do so) can be sobering. Since the book is about teenagers, I’d recommend it to teens.

However, it’s not Alcorn’s best. Even though Lord Foulgrin’s Letters was his first attempt, I’d say that The Screwtape Letters by Lewis is the book that is a must-read of this genre. It’s sure to speak deeply to the casual and committed Christian. Each book is an attempt to wise up Christians to the fact that we have a spiritual enemy with very real plans for our spiritual downfall. In a sense, they help us follow Paul’s instructions to forgive…

So that Satan will not outsmart us. For we are familiar with his evil schemes. (2 Corinthians 2.11 NLT)

Disclaimer: I received this book free from Waterbrook/Multnomah through the Blogging for Books program. The opinions I have expressed are my own, and I was not required to write a positive review.