Review: The Language of God 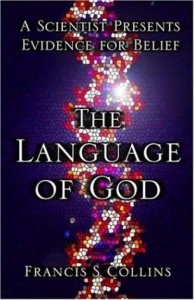 There might be some who would mock me for attempting to review Francis Collin’s book The Language of God. After all, he’s a well-known scientist and headed up the government-backed Human Genome Project which mapped human DNA. I’m a pastor.

In addition, Collins is a genuinely nice guy from all accounts. He also is a Christian in that he professes that Jesus Christ is the Son of God and seeks to live his life in obedience to the commands of scripture. As a pastor, I’m grateful for Collins’ outspoken faith and his diligent attempt to enable those who embrace science to also embrace faith. There should not be a conflict, since the God that is revealed in the Bible is also the God who made all there is. He is the author, and so as we read his “book” of creation, we should be able to arrive at similar conclusions.

However, that is where I disagree, fundamentally, with Collins. He comes down in the theistic evolution camp. He believes that God initiated the process of life with the Big Bang and has essentially stood outside of the process, allowing it to evolve on its own course. This has taken billions of years. At some murky point which he is unable to explain, God stepped into the process and began relating with humans after their evolution from a common ancestor.

He believes that Adam and Eve and other parts of the scriptures are to be taken figuratively, but apparently, he has decided to take at least the New Testament’s claims about Jesus Christ literally. That arbitrary selection poses a problem – not just to me, but even to many of his areligious scientist colleagues who demand to know what gives him the authority to pick and choose the parts of the Bible to believe.

Now we are no longer primitive. Now the whole world seems not holy… We as a people have moved from pantheism to pan-atheism…

It is difficult to undo our own damage and to recall to our presence that which we have asked to leave. It is hard to desecrate a grove and change your mind. We doused the burning bush and cannot rekindle it. We are lighting matches in vain under every green tree.

Did the wind used to cry and the hills shout forth praise? Now speech has perished from among the lifeless things of the earth, and living things say very little to very few… And yet it could be that wherever there is motion there is noise, as when a whale breaches and smacks the water, and wherever there is stillness there is a small, still voice, God’s speaking from the whirlwind, nature’s old song and dance, the show we drove from town…

What have we been doing all these centuries but trying to call God back to the mountain, or, failing that, raise a peep out of anything that isn’t us? What is the difference between a cathedral and a physics lab? Are they not both saying: “Hello”?

Man’s attempts (both scientists and theologians) have needlessly dissected our existence into faith or science. I’ll explain my viewpoints on that dichotomy later in the series. I hope to allow this series to provoke dialogue. But a few caveats:

So for this first entry… a teaser.

Collins reveals his perspective early on in Language:

It’s incredibly helpful to know what lens he views evolution and science through. I want to reiterate again the respect that I have for him. His sincere desire to create a helpful book is obvious throughout. He’s reaching out to those who currently embrace science as their faith. He wants to help them see that their love of science does not have to be killed in order to come to faith in God.

However, in this revealing quote, (and through the rest of the book), Collins elevates scientific method and natural laws above God’s Word and His own ability. By assuming that God must work a certain way and assigning God to the “spiritual” domain, he demonstrates his belief that God must operate according to the physical and natural laws that we are subject to (and that He created). “Science” in this perspective becomes the arbiter and revealer of truth and so understandably from this view is “the only reliable way to understand the natural world.”

After digesting his worldview, it was ironic that he nailed my thought process on page 33 in his statement, “A torrent of your own objections has begun to form.”

Indeed. I don’t like how he elevates science and makes faith its servant. For me, there is faith and faith only. Hebrews 11.6 does not say, “Without science, it is impossible to please God…” Rather, it’s faith. Hebrews 11.3 says:

By faith we understand that the universe was created by the word of God, so that what is seen was not made out of things that are visible.

What makes us clearly think we can think clearly?

Faith is required because scripture tells us that no matter how much we don’t like or that we want to deny that our very brains and logic systems are ultimately flawed by sin. Our minds are clouded and must be cleared by the light and love of God. Only then can they function as they were intended to.

In addition, because of sin, our consciences are corrupt. Our thinking is flawed. We see partially. Our motives are impure and skewed. No matter what the observation of our natural world and the methods that we use, our conclusions and interpretation of data are flawed, obscured and, according to scripture, even set against the knowledge of God.

(Here are some supporting scriptures for the above conclusions).