Review: The Lost World of Genesis One 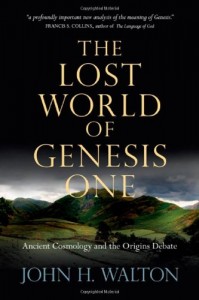 Each year, I try to do research and reading related to the ongoing debate between proponents of evolutionary theory and those of biblical creationism. I can easily say that it is a constantly evolving battle. John Walton’s 2009 release of  The Lost World of Genesis One steps into that fray attempting to reconcile the scientific community with the metaphysical/spiritual community.

One of the reviewers of Walton’s book said it was very readable. I’d like to add a caveat. While it attempts to provide an accessible understanding of the overall debate over origins and translation of the creation account in Genesis 1, it is dry. He does offer a few helpful and creative analogies throughout the book that seem to place the book on a “lower shelf” for those who may not read much in this area, but I’m not sure if he was really successful.

With that said, Walton’s basic premise goes like this:

If God were intent on making His revelation correspond to science, we have to ask which science. We are well aware that science is dynamic rather than static. By its very nature science is in a state of flux. If we were to say that God’s revelation corresponds to “true science” we adopt an idea contrary to the very nature of science. What is accepted as true today, may not be accepted as true tomorrow, because what science provides is the best explanation of data at the time. This “best explanation” is accepted by consensus, and often with a few detractors… We gain nothing by bringing God’s revelation into accordance with today’s science. In contrast, it makes perfect sense that God communicated His revelation to His immediate audience in terms they understood.

The first half of the book is when Walton offers his novel interpretation of Genesis 1 as being a functional creation intended to culminate in God’s cosmic temple. Walton spends far too much time comparing the biblical audience and culture with other ancient near Eastern cultures. His interpretation of Genesis 1 is thus weighted heavily toward how other cultures – and decidedly not biblical ones – thought about creation. He uses ancient creation documents to prove his point. My point, however, is that God was rewiring the Jews all along to think different (Steve Jobs should have been a big fan of that.) How an ancient culture thought is thoroughly difficult for us to interpret, but Walton has no problem doing so and then reading this interpretation into the biblical account of creation.

I am not suggesting that the Israelites are borrowing from these ancient literatures. p78

His occasional statements like the one above can not account for the amount of authority that he gives to these other non-biblical sources. So, I was unconvinced with his reasoning and interpretation that he offered in the first half of the book.

However, the second half of the book, beginning with the chapter titled “Other Theories of Genesis 1 Either Go Too Far or Not Far Enough” is truly good. I’d encourage anyone to read from there to the end of the book. It is there that – regardless of his own interpretation of Genesis 1 – he offers extremely helpful thoughts and principles that could dramatically reshape the current angst over origins – both in the scientific community and in faith community (and they don’t have to have a dichotomy).

He includes a chapter about how public educators should handle the teaching of origins that is sound, balanced and though it will make each opposing viewpoint uncomfortable, it does offer a way forward. Before offering five resolutions intended to provide a way forward, Walton says:

…empirical science is not an education unto itself that can serve all the needs of society or that can serve as the sum of one’s education. The physical sciences are only one branch of education, and we dare not isolate them from the humanities or elevate them as self-contained.

I was grateful for Walton’s attempt to offer a work that brings together two worlds that seem diametrically opposed so often in the origins debate. He is unabashedly clear that whatever means God used for creation, God was the Creator, and He is the Sustainer of His creation. He believes in a literal Adam and Eve. If you buy into his interpretation, his work offers a way to read Genesis without casting aside the authority of scripture. I appreciated his final comments:

We must not let our interpretations stand in place of Scripture’s authority and thus risk misrepresenting God’s revelation. We are willing to bind reason if our faith calls for belief where reason fails. But we are also people who in faith seek understanding.