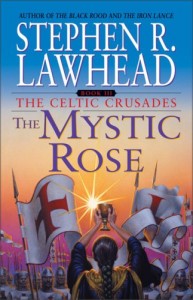 Stephen Lawhead first captured my appreciation as a magnificent chronicler of historical fiction with his epic book about St. Patrick called Patrick: Son of Ireland. I picked up his Celtic Crusade trilogy, hoping that it was as imaginative and as rooted in history. Beginning with The Iron Lance, Lawhead spins a tale that flips back and forth between the early 20th century and the Crusades. The Black Rood follows with a continuing story of one family’s holy calling to find, secure and protect the holiest relics of the church.

Finally, The Mystic Rose ends the trilogy. It moves from Constantinople to Spain (I was excited that it passed through Bilbao, where I’ve been). Lawhead weaves in some of the intrigues of the unholiness of the Crusades, the mysteries and rumors of the Knights Templar and the very real unrest among Christians and Moors in these books.

A young man named Murdo, followed by his son Duncan and then his granddaughter Catriona, capture your heart in this action-packed and easy-to-believe series. It kept me reading and, as The Mystic Rose wrapped up, made me sorry to be finishing.

In one family’s pursuit of the honor of God, the lance that pierced Christ’s side on the cross, a remnant of the cross itself, and the holy grail are all found and recovered before vanishing again in the mists of time.

If you’re looking for a great historical fiction series to begin, you can’t go wrong here.