Review: To Change the World 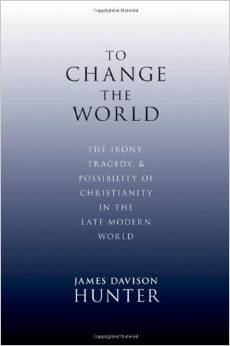 I was a little skeptical about this book when a Virginia campus minister recommended it last year as a required reading for the Kairos Leadership Initiative. First of all, college students have a lot to read anyway. Second, it’s big. Third, it’s about… philosophy. My fourth and final objection was that it was written by a professor at the University of Virginia. Now that I live in Blacksburg and am a Virginia Tech fan, we look upon things from UVA much as the Jews did at Nazareth as we mutter, “Can anything good come out of Charlottesville?”

To Change the World: The Irony, Tragedy & Possibility of Christianity in the Late Modern World by James Davison Hunter is a profound read for anyone wishing to “change the world” as a Christian. The first section of the book is used to demonstrate how Christians from three different streams (liberal, evangelical and communal) have attempted to influence culture in the United States. The second section examines the use and misuse of power by Christians in their desires to acquire it and direct it toward culture change. The final section unpacks what Davison calls a “theology of faithful presence” which he urges over against historical and existing methods of cultural influence by Christians.

What’s fascinating about the book is how intuitively right his reasoning is. I found myself nodding several times in one of those “he just said articulately what I’ve sensed but never been able to put my finger on exactly.”

Christians have tried to “take the culture back” from its seeming steady lapse into paganism a number of different ways, and Davison asserts that every historical approach in the U.S. to influence culture is doomed to fail because it fails to understand the movements of culture and how a culture actually changes or can be changed.

Idealism is the underlying fatal flaw of all approaches to cultural influence by Christians, he says.

Idealism leads to a naivete about the nature of culture.. Every strategy and tactic for changing the world that is based on this working theory of culture and cultural change will fail – not most of these strategies, but all. (27)

Instead of angry crusades against social ills, Davison instead urges Christians to get in touch with the message of the gospel preached and modeled by Jesus and the apostles and seek to live that message among our culture first. Typically Christians (liberals and conservatives) seek power through political influence, thinking that if the “right” laws or policies are passed, then culture will change. This leads to inevitable failure since a constant vigilance on who’s in “power” replaces the raising up of Christ-centered leaders in every area of social influence.

In other words, Christians in the U.S. have done what Republicans and Democrats and other social groups have done. They’ve sought the jugular of power centers. In the meantime, they’ve neglected the gracious pursuit of faithful presence in other arenas of cultural influence: education, media, film, law, arts, music, etc.

The failure to encourage excellence in vocation in our time has fostered a culture of mediocrity in so many areas of vocation… A theology of faithful presence means a recognition that the vocation of the church is to bear witness to and to be the embodiment of the coming Kingdom of God. (95).

His chapter titled The Challenge of Faithfulness was the best in the book, in my opinion. Current and past “culture wars” by Christians to claim or reclaim influence all center on the battle of establishing a dominant culture in the U.S. Christians want to establish one based upon the teachings of the Bible. Those who aren’t Christians are fearful of such a culture. So the battle rages in a pluralistic age around which culture should have dominance and why.

Faithfulness is a challenge for Christians, Davison says, on a personal level. Put simply, with all the truly evil influences of culture, how does the individual Christian herself/himself stay faithful to the teachings of the Bible and maintain a vibrant relationship with God? Until individual Christians can demonstrate faithfulness, it will be exceedingly difficult to exert faithful presence to our culture.

One of the significant developments has been the undermining of words, of our vocabulary. No one is really sure what anyone is saying any longer, because we can’t agree on what words mean. Take marriage, for example. When you add in the explosion of information (and thus more words) into culture, no one can keep up, and vast groups of people become detached. There is no common culture to appeal to any longer.

Of even greater significance are the social conditions created by the new communications technologies… these electronic media represent an epoch-defining transition, perhaps only the third revolution in communication in human history, the first being the invention of writing in the axial age civilizations, the second being the invention of moveable type in the 16th century Europe… These electronic media have transformed the nature of consciousness and culture as well. (206)

Because of the rate and volume of information and communication, not only is there no agreement on what culture should be dominant, but we can’t even talk to one another about it effectively. Informed dialogue and debate has been replaced by frustrated name-calling and 140-character responses in a tweet.

Such an environment [is not] conducive to depth in reflection, relationships or commitments… Whatever good they provide [the technologies] they lead to a place of absence, a place where we cannot be confident of what is real, good, or true. (210)

I’m not going to spend too much time describing his “theology of faithful presence.” If you aren’t going to read the book, I’d encourage you to hop over to Amazon and read some of the spoiler reviews there.

However, I really would encourage you to read To Change the World. It is not too lengthy of a read (286 pages without the endnotes). Davison is successful at putting some top shelf thinking onto the lower shelf for readers that might at first be intimidated by his work. In other words, while the concepts are profound, his writing style is readable. You’ll be proud of yourself for digesting such important thoughts, and you’ll also have a better grasp on how to truly change our world.