Review: When Missions Shapes the Mission

I did a brief preview about the book a few days back. David Horners is the pastor of Providence Baptist Church in Raleigh, NC (Awesome URL: pray.org). His book, When Missions Shapes the Mission, is a deeply challenging book addressed to pastors and leaders in the church. Because it was written from a pastor within my tribe of churches – Southern Baptists, I was pretty interested in what he had to say. 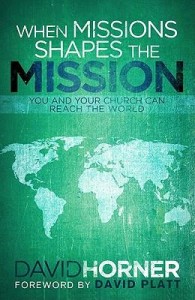 The book is essentially the presentation of a research project that was born from the conviction that churches have sidelined missions in favor of growing their own local kingdoms. What he presents is disturbing and should bring deep conviction to pastors, church leaders and local church members who do not have the world on their hearts.

Some of his findings don’t surprise me, but the extent of their damage upon the cause of Christ is lavish.

Horner presents an honest assessment of where evangelical churches actually are today in relation to their commitment to missions. In his book Good to Great, Jim Collins says that one of the marks of great companies is their ability to be brutally honest with themselves about where they actually are. It’s a slow death to believe your own press. What is needed, Collins says is to cultivate a climate of truth. This is essentially what Horner urges churches to do – be honest with where we’re not.

His first section in the book challenged me deeply. Let’s quit patting ourselves on the back for the occasional mission trip or conference. Is a commitment and love for the glory of Christ among the nations embedded in our churches? Does our DNA reflect the priority of God for His gospel to be made known to all people? Do our church members and small group talk, pray and act in ways that are a “conduit and not a cork” to missions mobilization? Are we seeing people from our churches commit their lives to the calling of vocational missions?

Horner walks the reader through a brief and helpful survey of past missions movements from history and identifies nine things that were consistently present in these movements:

Horner surveyed 300 churches that were demonstrating not just a commitment but a culture of missions involvement and from that survey, and delineates how these churches practices align with the elements of past missions movements. By doing so, he presents a helpful road map for an honest and repentant church to begin placing missions back as a foundation element in its mission.

Here are the 10 practices he says that churches today who are “investing in the cultivation of a missions content in their congregations” employ:

Perhaps one of the most frequent things I’ve heard in ministry when missions begins to be emphasized is how there is such great need for work locally. There are always objections to pouring resources – people, time, and financial – into works so far beyond our city limits. There are trust issues. The adage “out of sight, out mind” seems to dominate our mentality so much more than the scriptural command to “walk by faith and not by sight.” (2 Corinthians 5.7)

The book is a reality check, but it’s also a practical tool to help begin somewhere. While we have so much change to embrace in order to refocus our churches and members upon the glorious call to take the gospel to all nations, we can begin. There’s great hope, for so many churches each year are “getting it.” In fact, “there is an overwhelming response to take the gospel to the nations coming from 20- and 30-somethings.” (p153)

While the book is written to pastors and denominational leaders, I would highly recommend it as a tool to help mobilize a new missions team (or existing one) in your church. It’s a resource that’s meant to be challenge but not to leave you challenged. It hopes to transport you and your church onto fields white for harvest as it shows you some best practices to consider implementing as you begin leading your church to allow missions to shape your mission.

Note: I received this book for free to review, and I’m appreciative, because it wasn’t a chore. It was a challenge. Get it into the hands of others.