Review: The Scandal of the Evangelical Conscience

Just finished reading The Scandal of the Evangelical Conscience by Ron Sider. It’s definitely not a warm fuzzy. In fact, the first chapter pretty much wanted to make me go bang my toe with a hammer.

In it, Sider decries the fact that in poll after poll, researchers are discovering that the behavior of those claiming to be Christian in America is no different from those outside the church. In the areas of divorce, materialism and the poor, sexual misconduct, racism, and physical abuse in marriage (need we go further?), he cites results that show no significant statistical differences between nominal Christians and larger society. Ouch. In fact, in the Bible Belt some of the statistics were actually higher among “Christians.” 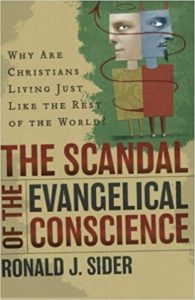 Sider then proceeds to offer a brief account of the church’s fall from grace in the past 200 years and gives some beginning thoughts on how to counter the disconcerting compromise of the church with the world.

Some of his conclusions are:

It’s a short, quick read that will result in a long, hard think.