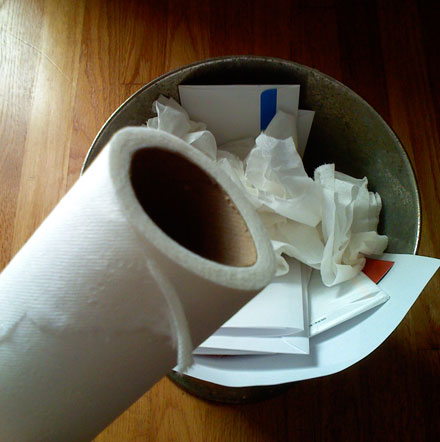 Groan. I have been waylaid by a sinister snot monster. It ambushed me sometime early Wednesday a.m., because I woke up talking like Donald Duck. Normally, I would appreciate that since he’s my favorite cartoon character.

Just before lunch, the sneezing started. Ryan came over for a pastoral meeting, and I still had the energy to chuck snotty tissues at him. Just when you think a person can’t move any faster, they surprise you.

After lunch at La Teraza, I came home and worked through the afternoon on some website stuff and began to slowly go through a roll of toilet paper, which I find to be much more convenient at times like this than a box of Kleenex.

Our small group met at my house last night, and no, I wasn’t emotional… It’s just my eyes had started betraying me – trying to keep up with my runny nose, I suppose. (oooo. nose… suppose…)

I went to bed early and discovered this morning a vacant house. I was rather surprised to discover it was also 11 a.m. I realized that my phone had roused me. I froggily informed (my voice sounded like a muppet) a friend that I wouldn’t be making it to Fordyce for lunch.

I’ve drug around the house this afternoon doing some reading and just finished some belated design work for Beech Street First Baptist Church in Texarkana. The kids both have afternoon activities, and Caro is taking pictures at Kim’s Dance all week.

My trash can is filling and my TP is shrinking. What a day…