Most of you know I’m an early adopter. Heck, I’m not just early, but I’m there in the delivery room, cheering on the birth of new techs, eager to cut the umbilical cord. (This is figurative because after my last literal experience doing that, I don’t think “eager” would describe my attitude…) However, I love to follow new technologies, particularly in the social media venue.

That’s why I accidentally sent out a massive bulk email last week from Friendfeed. I thought I was searching for my friends that already use the service (turns out, all 5 of them). What I actually did, however, was send an email to my entire Google contacts database – more than 1000 – urging folks to use Friendfeed. Don’t. It’s just not ready yet for consumer use. I don’t have time hear to gripe about FF’s imperfections (and they are many).

However, I saw a quick review of a service I’d not heard of called Streamy.com on TechCrunch.com, and of course, I clicked over to the service with mounting excitement. I had soothing baby music ready to play as I coddled this new addition to the world of lifestreaming. What I found, however, was a pretentious preteen. It was a full-featured, fast and consumer friendly service!

I had some problem figuring out how to create my account rather than just linking one with Facebook (in itself a nice feature). After solving that, I was off and running. The screenshot below shows you how I’ve configured (so far) my custom Streamy window. 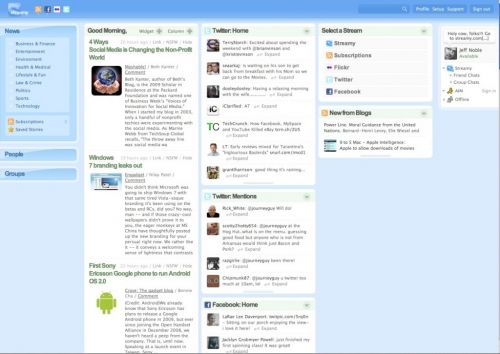 Within a few moments, however, I was disappointed that I was apparently going to have to enter manually each blog I follow. I couldn’t figure out how to import my feeds from Bloglines or Google Reader. I clicked over to support (they use Get Satisfaction), found others with a similar question and clicked “I have the same question.”

Imagine my surprise when within a few hours later, I was notifed by email via the Get Satisfaction site that Streamy.com had created the option to import feeds from Bloglines, Google Reader and exported opml files! Talk about service (and satisfaction!).

I’ve now made Streamy.com my homepage in Safari and Firefox, and find that I am enjoying it more than drifting back and forth between Twitter and Facebook. I like it better than Tweetdeck because I can also keep up with my blog subscriptions. Yes, you can post to Facebook, Twitter and other services from it as well.

Swing by and check out Streamy. It may have, in one fell swoop, put Friendfeed and other services in the grave trying to keep up. (Of course, most parents of preteens feel that way at one point.)