Sunday nights in the 70s

I was 10 years old in 1978. Sunday nights had two conflicting priorities in our household.

One was church. The other was the Wonderful World of Disney.

The conflict was one of epic proportions for kids whose families went to church, and every Sunday afternoon at approximately 5:17 p.m., the angst began..

A quick word about the “Sunday Night Worship Service”

For those of us who grew up in traditional churches, we knew about the dreaded Sunday Night Worship Service. It was basically a repeat of the Sunday morning service, but with less formality, less attendance, and usually less preparation by the music leader and preacher. It was a relaxed, almost devotional-oriented service. It seemed to be one of those things that afforded the adults more time to visit and the die-hard church attenders an opportunity to demonstrate their loyalty to the denomination (and occasionally to Jesus). No one really wanted to be there. It was just something the adults did – and drug their kids to participate in.

In larger churches, there were youth choirs to participate in, discipleship training opportunities and the occasional “snack supper” for those of us who really loved Jesus and showed up at 4:00 for children’s choirs, 5:00 for discipleship training and then 6:00 for the Sunday Night Worship Service. We were church professionals, I’m telling you.

During those days, as a kid, if you made it to 5:17 p.m. and your family was still at home, there was a chance that you might not be going to church. A few things began happening simultaneously around the house:

The Wonderful World of Disney

At our home in Little Rock, if we missed/skipped SNWS, it meant that we would be home for the Wonderful World of Disney. It was a magical hour of imagination and fun. I am still moved by the When You Wish Upon a Star theme song. (When the family was in Disney World a few years ago, there was a fireworks show around the Magic Castle each evening, and they played the song throughout the park. I just about lost it.) 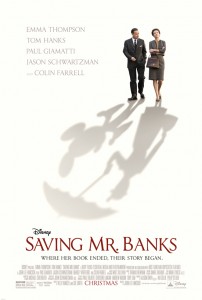 The reason this is fresh is because Carolyn and I saw Saving Mr. Banks tonight. It’s the story of Walt Disney’s 20-year effort to get the rights to produce Mary Poppins from the book’s author P.L. Travers. From the opening scenes, we were both mesmerized, and I’ll confess several moments during the movie that I fought the throat contraction thing that presages a full-out release of liquid from the eyeballs.

I was completely unprepared for the power of the film and its messages of redemption and forgiveness. The backdrop of the 1960s era was impeccably done, and it contributed to the wonderful simplicity of the story. Tom Hanks and Emma Thompson are stunning in their portrayals of Disney and Travers.

There was one scene in particular that I told Carolyn grabbed me by the emotional throat toward the end of the movie. It was Travers’ solo walk down the red carpet at the premier of Mary Poppins. Just when you thought she’d walk in alone, the Mickey Mouse character stepped up, offered her his arm and escorted her in. Gulp. It was touching and transporting.

I felt as if that simple scene bridged 35+ years of my life to a living room in Little Rock. It was there that I sat in front of a screen with my family, enchanted and mesmerized by the power of story.

And that brings me back to the needless conflict between church and Disney. A really good, powerful story captures everyone’s imaginations. Christians are in possession of the world’s greatest story. Unfortunately, we tell it poorly – and at times, we package it in dull, drab ways. (Think the Sunday Night Worship Service.)

In the summer of 1997, the Southern Baptist Convention voted to boycott Disney and its subsidiaries over its perceived “anti-Christian and anti-family direction.” Many of us who disagreed with the boycott wondered if we’d be considered backsliders for having Donald paraphernalia. We certainly couldn’t brag about going to Disney World.

The boycott ended in 2005 with no appreciable impact on the Disney Corporation. Some would argue that it worked due to falling stock prices, but that could have been because of the misguided reign of Michael Eisner as CEO of Disney as well. It was an intangible, in other words.

What bothers me after seeing the beauty and inspiration of a powerful story in Saving Mr. Banks is why Christians can’t applaud beauty more. It’s not necessary to create “Christian” films and such to recognize wonder, truth and sublime inspiration in our world. On top of that, it was a star that announced the birth of mankind’s greatest story and changed humanity’s wishes into dreams come true. Let’s tell His story well and without missing how biblical themes are echoed in the stories of our culture.

And mom and dad, if you were hoping the kids didn’t say, “It’s time to go to church” either… thanks for the occasional retreat from church and into the living room with Disney.