I’ve been playing fantasy football since 1992. I’m still in that same league with some friends from Ouachita and a few others who have joined in the past 15 years. About nine years ago, I created another league that has guys who were mainly from Monticello, but it too has grown and expanded to include others. Finally, there’s a kids’ league that was created last year, mainly for Sam and some of his friends, and this year, it is just our family and another family, with a total of six teams (1 team for me and another for the other parents and the other four teams for kids).

Already, the fantasy football gods have sought to smite me. Pittsburgh Steeler running back (and NFL rushing leader at the time) Willie Parker broke his ankle in Thursday night’s game. I owned and started him in two different leagues.

My son Sam and I are both addicted to fantasy football and usually devote our Sunday afternoons during football season to watching the games and keeping track of our stats and scores. (That is, unless I fall asleep on the God Couch).

Most of you won’t be able to appreciate this, but during the last game of the regular season, one of my team’s scored a league record 309 points. As far as I know that would beat any record in any of the three leagues I’m in. 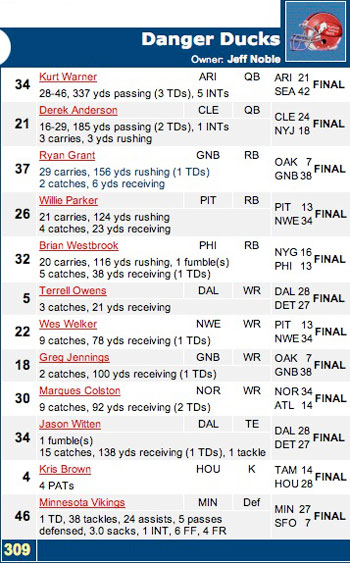 So for all you fantasy coaches out there who are still in your league’s playoffs, good luck! Here’s hoping that this is my year… in more than one league!