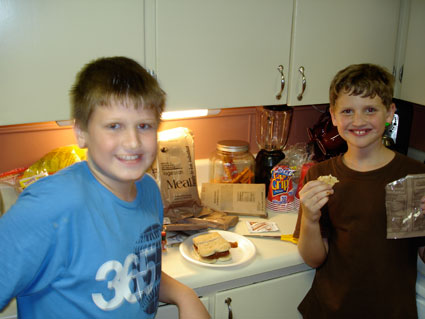 Sam and Zac McKinstry spent the afternoon together. I never saw them until they came loping into the house, dripping in sweat.

“Where have you been?” I asked, curious.

“Where on North Main?” I said. 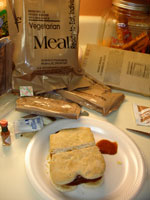 They both snickered and then proceeded to the kitchen to eat an MRE, which Zac had brought with them. I stood there, scratching my head, wondering when I had begun to let rugrats get the best of me in conversations like that.

Zac and Sam both love the outdoors – Zac probably more than Sam, cause he lives, eats, and breathes the new shows like Survivor Man and Man vs. Wild. I think the McKinstry family have been living off MRE’s for the past few weeks, cause I keep hearing them describe various meals they’ve had. The most intriguing thing about an MRE is watching a plastic bag boil food without melting itself.

I sampled the Vegetarian Burger and tried to swallow some “cinnammon bread,” and in doing so wondered if they make PeptoBismol packs for the soldiers. 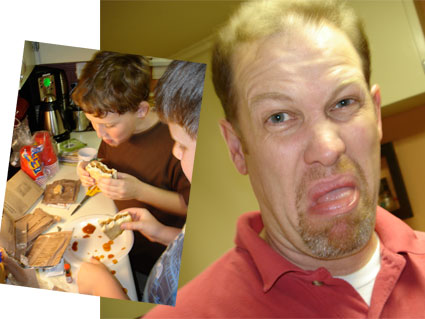