The church is losing its youth 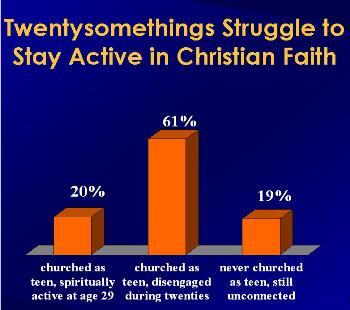 Yet another study, this one completed in just the last month, shows that the evangelical church continues to hemorrhage internally. Churched youth are checking out of the church when they leave home for college, and many 20-somethings who were formerly regular, faithful members of youth groups are opting out of the church.

I experienced this trend first-hand in my 8 years as a collegiate minister at UAM. We consistently saw supposedly faithful members of area youth groups avoid our campus ministries, as well as local churches throughout their college career (and some of them made a career out of college!). Choosing instead to get involved in other forms of campus “life,” many lived profligate lifestyles.

Take it for what it’s worth, but I believe that the high dropout rate is due to the continuing treatment of our teenaged youth as a subcongregation to be entertained. High energy worship settings, mini-sermons, and big events dropped all combine to create a regular attender, but not necessarily a disciple or a true worshipper.

I think churches today need to seriously reconsider discipling their students, beginning as soon as 3rd grade. We should no longer seek to entertain youth by creating a separate youth congregation but rather by modeling, training, and freeing them to do active ministry in the community, church, and regions that we live in. The sit, soak, and shout method has been proven not to work. The Barna study is another resounding alarm to its failure.

David Kinnaman, the director of the research, said:

?Much of the ministry to teenagers in America needs an overhaul ? not because churches fail to attract significant numbers of young people, but because so much of those efforts are not creating a sustainable faith beyond high school. There are certainly effective youth ministries across the country, but the levels of disengagement among twentysomethings suggest that youth ministry fails too often at discipleship and faith formation. A new standard for viable youth ministry should be ? not the number of attenders, the sophistication of the events, or the ?cool? factor of the youth group ? but whether teens have the commitment, passion and resources to pursue Christ intentionally and whole-heartedly after they leave the youth ministry nest.?

May our churches rise up and think deeply about how to stop the bleeding and start the blessing of this generation of youth.