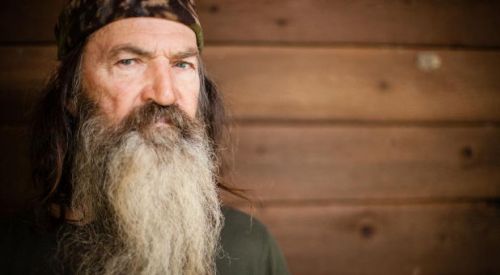 Unless you’ve had your head under a rock – or been in the duck blind – you are aware of the furor generated by a few isolated comments in an otherwise well-written and gracious article about Phil Robertson in GQ magazine. What’s ruffled feathers are Phil’s comments and viewpoint about homosexuality.

Here are the two article extractions that are quoted the most (I really encourage you to read the whole article for context). I’ll start with the one in which he quotes scripture and conclude with the one that has Phil’s typical colorful interpretation. (If you watch Duck Dynasty, you know Phil never pulls punches about how he feels about contemporary culture.)

“We ought to just be repentant, turn to God, and let’s get on with it, and everything will turn around… Everything is blurred on what’s right and what’s wrong,” he says. “Sin becomes fine.”

What, in your mind, is sinful? [asked reporter Drew Magary]

“It seems like, to me, a vagina—as a man—would be more desirable than a man’s anus. That’s just me. I’m just thinking: There’s more there! She’s got more to offer. I mean, come on, dudes! You know what I’m saying? But hey, sin: It’s not logical, my man. It’s just not logical.”

Since the article was published, President Obama has breathed a sigh of relief. His crashing approval rating and inept rollout of ObamaCare are off the front pages while American pop culture re-debates the sinfulness of homosexuality.

Here are five articles that flew above the others in the initial hours of flap:

Muting one another isn’t what debate is for in a free society. It’s what remote controls are for.

Nowadays, Christians are the cultural heretics. If you believe what the Bible teaches about homosexuality, your public platform may be in danger. No matter that Pope Francis, the Dalai Lama, and every imam in Turkey believes the same thing. We’re for free speech, until it offends someone. Then we pull the plug. It’s a bizarre sort of reverse McCarthyism.

The world is at war with Christ and those who put their faith in Christ. The silver lining of this act is that many Christians who decided they could sit on the sidelines and not have to care will have a wake up call — particularly millennial Christians.

The Church, however, must show it will stand with those who stand with Christ and not shy away from this fight lest too many weak and new Christians go wobbly and silent.

You will be made to care. You will not be given the option of silence or the sidelines.

Phil Robertson would have served the cause of Christ more faithfully if some of those comments had not rushed out. This is not because what he said was wrong.. Not all publicity is good publicity, and Christians had better think long and hard about the publicity we seek or allow by our cooperation.

The controversy over Duck Dynasty sends a clear signal to anyone who has anything to risk in public life: Say nothing about the sinfulness of homosexual acts or risk sure and certain destruction by the revolutionaries of the new morality. You have been warned.

The last two links are great reads with more alarmist tones. That, unfortunately, is typical many times in the Christian community when they feel attacked. Here’s one with a more balanced response that is disappointed in Robertson’s remarks:

First of all, I’m disappointed that homosexuality was reduced to sex. I know a lot of gay people who think in terms of companionship, intimacy, and friendship when they reflect on their attraction to the same gender. So, Robertson’s comments about a vagina vs. an anus is naïve, offensive, and misses the point of the whole debate over homosexuality; yes, even to me—a straight Christian who is a conservative Christian…

Try befriending someone who is gay or lesbian and you’ll discover a reservoir of creational, image-bearing ingenuity and creativity that can be delighted in. And you will see that the gay vs. straight question is much more than a debate about a vagina vs. a man’s anus.

What do I think?

First of all, I believe that the Bible teaches that the practice of homosexuality is a sin. Homosexual feelings, temptations or desires are not considered as an act of sin unless:

In each case, forgiveness is available, just as it is for heterosexuals who commit sexual sin through premarital sex, adultery, or who commit sin in their thought life by dwelling on lust:

“You have heard that it was said, ‘You shall not commit adultery.’ But I say to you that everyone who looks at a woman with lustful intent has already committed adultery with her in his heart.” (Matthew 5:27-28 ESV)

Second, the Bible teaches us to love people, period. Sometimes true love means tough love. But we are never justified in hateful speech, behavior or ridicule of others.

While there are times that scripture says we must withdraw from close relationships/friendship with people who continue to practice sinful behavior in spite of their knowledge otherwise, these commands are aimed at Christians who know better yet continue to practice sin. Notice below that Paul’s words do not single out homosexual activity. Any sexual sin is included.

“I wrote to you in my letter not to associate with sexually immoral people—not at all meaning the sexually immoral of this world, or the greedy and swindlers, or idolaters, since then you would need to go out of the world. But now I am writing to you not to associate with anyone who bears the name of brother if he is guilty of sexual immorality or greed, or is an idolater, reviler, drunkard, or swindler—not even to eat with such a one.” (1 Corinthians 5:9-11 ESV)

Third, our culture has amnesia and is consistently inconsistent. If our culture was represented by a hunter in a duck blind, it would be the one who was there wearing orange (ducks can see orange; I learned this the hard way), who had no ammunition and who was banging on a drum. It just doesn’t get it. And Christians shouldn’t expect it to. Speaking of duck blinds.. there’s a bigger blind out there:

“In their case the god of this world has blinded the minds of the unbelievers, to keep them from seeing the light of the gospel of the glory of Christ, who is the image of God.” (2 Corinthians 4:4 ESV)

We live in a culture that laughs over Miley Cyrus’ loss of innocence, is enraged by Alec Baldwin one moment and laughing along with what’s in his wallet the next. As Mohler observed in his article above,

Another interesting parallel emerges with the timing of this controversy. The current issue of TIME magazine features Pope Francis I as “Person of the Year.” Within days of TIME’s declaration, Phil Robertson had been suspended from Duck Dynasty. Robertson’s suspension was caused by his statements that homosexual acts are sinful. But Pope Francis is riding a wave of glowing publicity, even as he has stated in public his agreement with all that the Roman Catholic Church teaches, including its teachings on homosexual acts.

Francis has declared himself to be a “son of the church,” and his church teaches that all homosexual acts are inherently sinful and must be seen as “acts of grave depravity” that are “intrinsically disordered.”

But Pope Francis is on the cover of TIME magazine and Phil Robertson is on indefinite suspension. Such are the inconsistencies, confusions, and hypocrisies of our cultural moment.

What enrages our culture is inconsistent and laughable. How else can we explain the outrage against a redneck who sincerely believes the Bible, verbalizes his belief and is suspended? In perspective, we have an elected President who has lied to the American people in order to get elected (“You can keep your health insurance.”) and yet the moral outrage directed at him comes from different sources.

We live in a morally conflicted culture. It’s ok to lie. It’s not ok to say things that a book has said for 2000+ years.

Many in American culture marginalize Christians and their views due to their discomfort with the implications of the existence of a God who has a Real Opinion. It’s not Christians they have a problem with. It’s the God revealed in their Bible. This God of exorbitant and extravagant love is also a confusing God to them. He’s confusing because He apparently has an opinion about the best way for humans to live their lives. Most people don’t like that. They want freedom from authority. How they feel, rather than what God has revealed is their preferred modus operandi.

So most are comfortable with cultural hypocrisy. And they’re hopeful that no one notices their personal hypocrisy.

Some of the same people mad at Phil also bemoaned the antics of poor Hannah Montana and Justin Bieber in a paternal and moralistic fashion. This selective morality is dissecting the American mind and leaving it an incoherent mess, unable to discern truth from falsehood, beauty from trash.

What I Also Think..

What I dislike is how touchy our culture has become. Everyone’s afraid of saying something that will hurt someone’s feelings. We’ve become cultural cowards and as such, we’d rather blame, boycott, and belittle instead of sit down, dialogue and truly tolerate. This is true of both non-Christians and Christians. It’s indicative just how much we all need to grow up.

It was the pressure of one group that motivated A&E to suspend Phil. Create the opposite pressure if you desire.

I suspect that there will be a point that A&E reinstates Phil, and I’d love to be a fly on the wall in the Robertson household when that happens. I imagine his brother Silas (whom we know as Si) will be the first to declare, “He’s back, Jack!”