The gift of eternal words made personal – get a journaling Bible 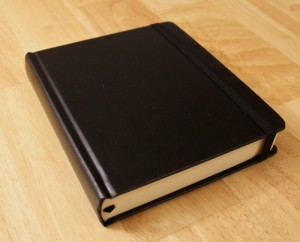 Last March for Sam’s 16th birthday, I gave him a Bible. Not just any Bible, but I gave him my Bible. It was a journaling Bible I bought several years ago for the purpose of giving to Sam on his 16th birthday.

I’d filled it with notes, thoughts, underlines and observations about God’s Word – what I was learning, moved by and what I hope he will notice and be moved by as well.

Then I saw this post at the Desiring God blog which encouraged the same practice, and I realized that somewhere back in the mists of time, someone probably gave me the idea. It’s too good to have originated with me.

And I also realized that it’s important for all of us to share good ideas with one another. So here’s a quote from that article:

Dads, write in your Bible.

Here’s the Bible I gave Sam (and the one that after I gave him, I promptly reordered from Amazon and have been filling up for Adelyn).

Give the Word with your words. You’ll grow through reading it and responding to it, and your kids will be eternally thankful as they get a glimpse into your spiritual walk.