The Goal of our Troubles… 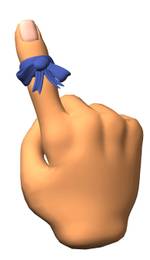 This is not original to me today. I just completed Day 3’s assignment in Week 10 of Beth Moore’s The Patriarchs. Only two more days, and I’ll be finished. I’m considering an online Bible study blog at this point. I’m going to write it and invite participants. Let me know via the comments if you’re interested. If I get 10 who will commit to a 4-5 week study, I’ll do it.

In Genesis 48, we read of Jacob’s blessing on Joseph and his two sons. Scripture records that Joseph had arisen to greatness in Egypt, becoming Pharoah’s right-hand man. He had two sons there, and named them Manasseh and Ephraim. Joseph’s life had not been a bed or roses. Talk about a dysfunctional family. Sibling rivalry had resulted in a brush with death as his brothers decided against a murder plot in favor of a money plot. They sold him. Plain and simple. (Some of you… don’t get any ideas here!) They decided to gain from their father’s loss (Jospeh was the favorite son). For 20 years, they kept the plot secret, although Jacob suspected something was rotten in Canaan…

Fast forward. Joseph was 17 when he was sold into slavery. He moved from a pit to Potiphar’s house to the palace. (all this recorded in Genesis 37, 39-41) in a span of 13 years, being 30 when he reached his position of power. His two sons are named in a way that carry great significance. In Hebrew, Manasseh means “forgetfulness” and Ephraim means “fruitfulness.” Joseph said in Genesis 41.51-52: 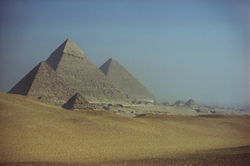 Fast forward once again. Joseph’s family has now moved to Egypt because of the famine and Joseph’s forgiveness. His father, Jacob is on his death bed, and Joseph visits him with his two boys. It was customary to bless the older son with a double portion (that’s why Jacob way back when had connived to steal his older brother Esau’s birthright). As Joseph positions his two sons to receive their grandfather’s blessing, he realizes in dismay that…

Joseph took both of them, Ephraim on his right toward Israel’s left hand and Manasseh on his left toward Israel’s right hand, and brought them close to him. But Israel reached out his right hand and put it on Ephraim’s head, though he was the younger, and crossing his arms, he put his left hand on Manasseh’s head, even though Manasseh was the firstborn. (Genesis 48.13-14)
When Joseph saw his father placing his right hand on Ephraim’s head he was displeased; so he took hold of his father’s hand to move it from Ephraim’s head to Manasseh’s head. Joseph said to him, “No, my father, this one is the firstborn; put your right hand on his head.” But his father refused and said, “I know, my son, I know. He too will become a people, and he too will become great. Nevertheless, his younger brother will be greater than he, and his descendants will become a group of nations.” (v17-19)

What’s the Point?
I think Beth Moore makes a great point here. The key to this blessing may lie in their names. It’s not a definitive explanation, but an enlightening one. Moore says,

Beloved, in God’s economy fruitfulness trumps forgetfulness every time. No matter how differently we feel at times, becoming fruitful in our troubles has far greater ramifications of blessing than forgetting our troubles.

That’s huge. And I agree. Our Lord would much rather us rise to greatness in the midst of our hardships and trials rather than simply “get through” them.