This post is a tag team between me and Adelyn. We’re posting from the Charlotte airport.. 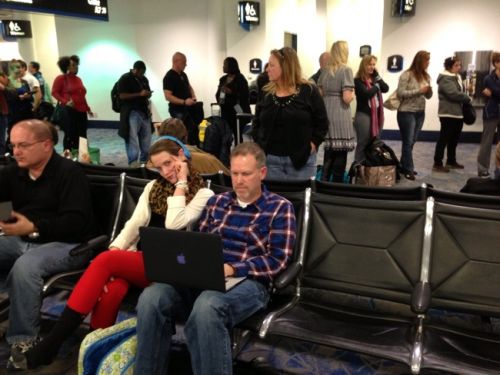 It never fails. Anytime our family attempts to stretch our wings and fly somewhere, we get clipped. Today was supposed to be so simple. Catch a flight out of Charlotte, ultimately landing in Midland, TX where we would be reunited with Carolyn’s family for Christmas.

We got to the airport, boarded the plane, and I’d settled down with my book while the kids were waiting for take off so they could watch a movie together on Sam’s new laptop. That’s when the curse caught up with us. 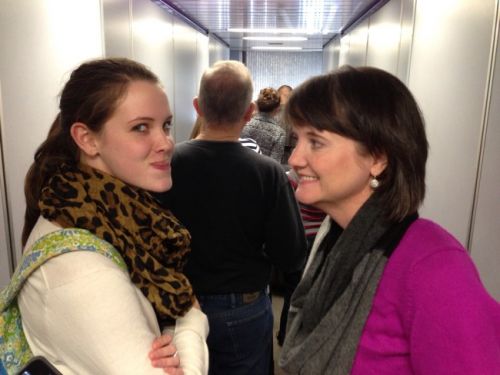 No, Adelyn, you don’t get it.. To be a guest blogger means you write something fascinating, humorous and insightful. It doesn’t mean that you type what is going through your mind at the moment.

Fine. Well I’m pretty familiar with these kind of situations at the airport. I’m yet to be proven wrong that having flight problems is not the usual thing. Everyone in my family is upset right now because the next available flight is at 1:00 am, but I’m not. Hey, there’s a Starbucks and restaurants all over this airport. I’m in heaven.

Oh. Well, that’s good to know. In the meantime, however, I have to deal with your monstrous brother who takes up two seats and is only still when he’s asleep. And your mother, who is on the phone to Southwest trying to finagle an early flight out of Dallas, is in a good mood now, but wait until she hits her normal nightly “tired mode” which usually takes place about 7:53 p.m. each evening. 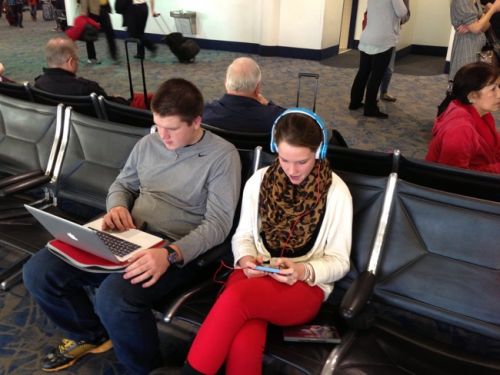 But your point about Starbucks is well-taken. That’s a plus. I just wish they had a Barnes & Noble or Best Buy.

Correction. Although Sam is still when he’s asleep, he snores like a monster with a sinus infection. And yes, mother’s days usually last from 6:00 a.m. to 7:00 p.m. I don’t think she is aware that time goes to two digits because she goes to sleep before she can see the clock turn 10:00 p.m. 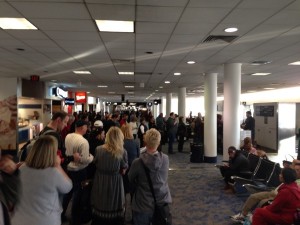 At any rate, Southwest Airlines is dropping the ball worse than Clint Stoerner did against #2 Tennessee in the 1999 game that still gives every Hog fan heartburn. They’ve got 100+ frustrated/mad people here in Charlotte. While they’ve already offered $200 voucher per person, that did little to assuage the crowd. Especially considering that we’ve been off the plane now for almost three hours, and the ONE guy at the customer service counter has only been able to help about 7 people. There’s going to be a riot, I’m telling you.

I’m somewhat relieved we’ve decided to hunker down and take the 1:00 a.m. flight to Houston and just be miserable there until the 6:30 a.m. flight out.

We’d like to  go out to eat, but we can’t leave the airport without a security voucher.. And you’ve got to stand in line for that… 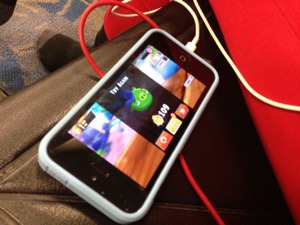 Well in the mean time my Angry Birds game restarted… to add on to the Noble family curse. So I can catch up on all my levels. Haha, not that I got very far anyways.

Ok, enough with the puns. We hear them enough at home. I didn’t know that you put them on your blog… 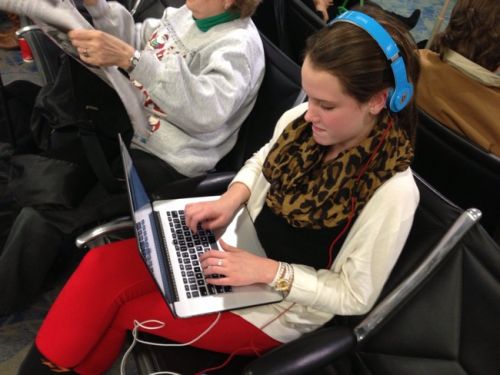 Carolyn and Sam just tried to leave the terminal and were told they had to stay here. TSA closes at 10:00 p.m. They need a security voucher to get one. To get one of those, they have to stand in the mile long line. This is one of the most classic airline fails I’ve seen. Even if we could leave, our luggage is still on the plane…

At least the WIFI is free here.

And Adelyn is now absorbed in Angry Birds..

So, before we (or you) completely lose the Christmas spirit, take 5 minutes and watch this Hallelujah chorus video by Cloverton: