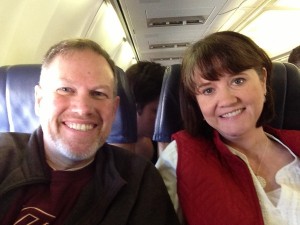 This was when we thought things were going smoothly.

If you followed our adventure to New Mexico, you need to know we’re back. But our luggage ain’t. We landed in Charlotte last night, relieved that we didn’t have to stand in another 9-hour line (read this post for how that went). Our flights went relatively smooth (only an hour delay in Houston), but imagine how we felt when we waited and waited and… waited at the luggage carousel.

It felt a little like not being asked to dance at a junior high cotillion.

Everyone else was getting their luggage and walking away with relieved smiles on their faces.

Or getting picked last for a kickball team in fourth grade.

After we realized that we could either go to the Southwest Airlines counter to file a claim for our luggage or help mop, we decided to go file a claim. No one was on duty. The same lady who was helping unload the last bags on the first floor finally came upstairs to the second floor and helped us with our luggage claim. 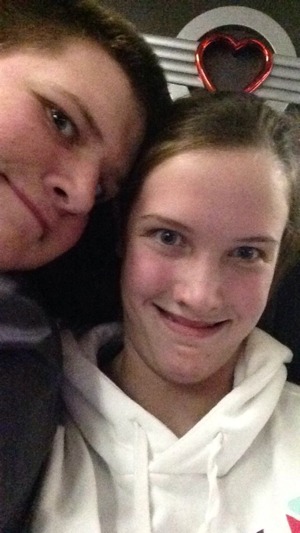 Awkward kids.. Sitting away from us, thank goodness..

Carolyn related that she had medicine she needed in her luggage when they said it couldn’t be delivered until Thursday. They offered us a food voucher of $50 for the Love Field Airport in Dallas as a concession. I have no idea how that will help her thyroid levels, but it curiously made my blood pressure shoot sky high.

On the drive home from Charlotte, Caro and I rehearsed the Noble family flight curse:

In all of the above, one thing I’m grateful for (and Caro and I told our kids again last night) is how the family takes it in stride. We may be exhausted, frustrated and ready to give a flight attendant a wedgie, but we manage to keep our cool. Our kids are magnificent. Truly. They could add to our stress by being whiny or negative, but they just knuckle down and grin and bear it. Adelyn wrote from Charlotte:

Everyone in my family is upset right now because the next available flight is at 1:00 am, but I’m not. Hey, there’s a Starbucks and restaurants all over this airport. I’m in heaven.

Sam focused on matters of monumental significance… meaning, he was absorbed with some Angry Birds racing game.

On getting kicked out of a terminal at Houston’s airport…

Per this post, we finally arrived in Houston at 3:00 a.m. There were about 30 of us – a few families with babies, even – who sprawled out on chairs and rows of seats to get some sleep. (Remember, we’d had to stand in a 9-hour line in Charlotte the previous day.)

I say “they” because she didn’t immediately find me. I was in the bathroom. I may or may not have been on Twitter. I will admit that I was sitting down. It had been a long day. I was oblivious to what was happening outside my own little Eden.

That was until I heard a woman’s voice in the men’s room saying, “Is anyone in here?”
“Uh, yes!” I said. My voice cracked a little with the proclamation.
“You need to finish and leave the terminal!” she barked.
All I could think to say was “Yes, ma’am!”

It was a flashback response. I felt like a kid getting caught climbing on the China cabinet. I felt like I was in trouble. It’s hard to think of logical responses or sarcastic retorts when you’re yelled at on the pot by a lady from TSA.

I exited, and for 15 minutes, the Noble family sat in silent defiance on a bench just inside the TSA area without exiting the terminal. We weren’t going to take it. No, we weren’t gonna take it! Carolyn jumped up and threw her scarf on the floor and began to belt out Twisted Sister’s lyrics at the top of her lungs:

We’ve got the right to choose and
There ain’t no way we’ll lose it
This is our life, this is our song
We’ll fight the powers that be just
Don’t pick our destiny ’cause
You don’t know us, you don’t belong

Sam and Adelyn jumped up and began fist pumping as Carolyn hit the chorus again. The TSA agents cowered in fear in the corner, realizing they’d messed with the wrong family.

With each raucous “yeah!” another person from the flight stepped into our circle. It was like a hard rock revolutionary flash mob. I sat meekly on the bench videoing the event for posterity.

Ok, so maybe we sat there for 4 minutes before a TSA groper told us to leave, and we defeatedly filed out to join the rest of our flight in the TSA line that would open at 4:00 a.m. But at least we were the last to leave.

We’re glad to be back, and on this last day of 2013, we’ve taken down the Christmas decorations, done a little car shopping (I got a $25 VISA card just for test driving a new Honda – yes, I’m a sucker for deals like that), and exchanged some gifts. The house is quiet now, recuperating from another Noble family Christmas.

Next time we travel, who wants to go with us? Maybe you can counteract the curse.